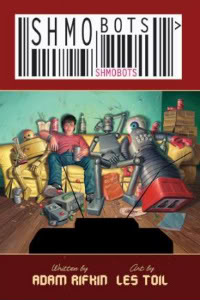 Government negligence leads to a city full of worthless robots (termed [[[Shmobots]]]), and three of the laziest ones hang out with a guy and do pretty much nothing with their lives.

The humore here — from writer Adam Rifkin — is all pretty obvious, heavy on robot cliches and slacker jokes we’ve heard before. Yet the book has an undeniable charm, no doubt because its creators acknowledge those faults and even celebrate them.

Sure, the lead robot character is a carbon copy of Bender from Futurama

, but he’s used (at least this is my guess) to make fun of the stupid humor genre even while revelling in it.

There is a more involved plot than I let on: the robots and human friend are constantly looking for money, while unknowingly they’re being stalked by the Shmobot Killer. The plot advances at a marijuana-soaked pace.

Rifkin never pushes too hard for cleverness, and instead lets the mutually destructive relationship of the friends carry most of the pages as they engage in Adult Swim-style adventures like visiting a strip club and planning a concert for their crappy band.

The most consistently funny one is Eyeballs (you can guess what he looks like), who has a bizarre robot speech impediment in that he begins and ends each sentence by saying his name.

The book would be much less tolerable if it weren’t for Les Toil’s art, which has all of the cleanliness and descriptive strength of Cliff Chiang’s work in Dr. 13

His robot concepts are fun, and he throws in some action sequences that are effectively simple.

It’s definitely not a book for everyone, with plenty of risque elements, but it’s not bad for a fun, forgettable summer comic.