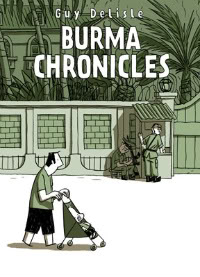 would be especially topical. But you’d be wrong.

As is Delisle’s style, he passes up on the chance to take an expansive view of the country where he lived for six months (he’s written previously about stints in Pyongyang and Shenzhen).

Instead, the book is almost self-centered in how it simply recounts Delisle’s experience as the husband to a Doctors Without Borders. He depicts himself as the ultimate average Joe, a dude content to live life as it comes.

Most of the cartoons are of little moments, like Delisle venting about the sporadic electricity (and sporadic air conditioning), or his hunt for ink to finish a book.

That isn’t to say he doesn’t experience Burmese culture or interact with the locals. He does, but the majority of what he includes in the book are little innocuous windows into the country.

While there is an urge to demand something more from someone privileged to spend so much time in such a strange place, Delisle’s approach actually does a pretty solid job of depicting the day-to-day life in the country.

He doesn’t engage in serious reporting or push for information (he probably would have been deported if he had). Instead, he shows the practical ways in which the government’s bizarre oppressiveness impacts people’s lives.

The most extreme instance is when Delisle starts meeting with a group of Burmese illustrators, and one who has a government job is eventually fired (and maybe worse) after his employers learn of his contact with the Westerner.

The book is also, I should say, quite funny. Delisle’s style of storytelling and his art call to mind Lat’s [[[Town Boy]]] (though maybe the similar settings influences this connection).

The comedy is never forced or over-the-top, but rather the earnest little humors that inevitably arise in life — only more frequently when you’re an average dude in Burma.