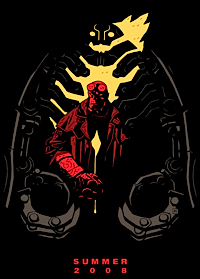 Mike Mignola, creator of Hellboy has certainly been a star in the comics scene for some years but the spotlight must be shining a little brighter now that his franchise  includes two hit movies.  We were lucky to get a chance to talk to him briefly at the show this year about the future of his book, the impact of the movies on his own storytelling, and the difficulties of letting go of the art chores on the book.

“If I get hit by a bus tomorrow, I don’t know what’s going to happen to the book,” said Mignola about the notion of passing the book off to other creators.  He said he couldn’t imagine letting go of the character the way Todd McFarlane has let other people work on his most popular creation, Spawn.

When asked if, given that, it was hard to stop being the artist on the book, Mignola said it was at first — but he really likes the look of the book these days and he’s fond of the work Duncan Fegredo has done for the book.  “Besides,” said Mignola, “if I was still doing the art it would take forever.”

Readers of Hellboy are undoubtedly aware of the way Mignola uses real-world mythology, so we asked him what we should be brushing up on for his upcoming books.  He said they were going to be doing a take on some British mythology and that the content would be similar to the second film in a few ways.

We also asked if he was concerned that Guillermo del Toro’s film franchise seems to be building to a very different conclusion than his comics are. “The only thing that worries me is that the third movie will come out too soon,” said Mignola. Adding that he had a very firm plan for the comics and that this plan might take 15 years to be realized in the comics.