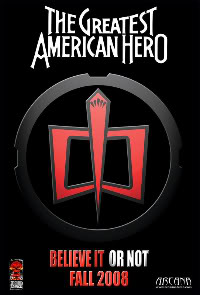 Here’s some Comic-Con news that’s sure to have the old "believe it or not, we’re walking on air…" song stuck in your head, the people behind the ’80s superhero show The Greatest American Hero have unveiled some upcoming projects.

At a panel session involving the show’s creator (on video) and some stars, it was announced that a new comic book series and an animated series are in the pipeline. CBR reports:

The comic coming out in November is a retelling of the origin story from the show with a few changes. The story takes place in present day, there will be less of a focus on Ralph’s teaching job, he no longer has a son and his hair is … not as big.

But everything else fans loved about the show is still there. "We’re retelling how I got the suit and met Bill Maxwell and Pam," said Katt. He went on to say that the book is initially planned as a six issue story, but that after they’ve retold the origin, they have Cannell’s blessing to branch off in other directions.

And how about a GAH movie?

Finally, the cast was asked about the long running rumors of a feature film adaptation of the series. Katt did confirm that producer Stephen J. Cannell has a finished script for the feature film. He went on to say that he has read the script and thought it was fantastic.

He also said that Cannell currently has funding for the film but is looking for a distributor and that he is in talks with 20th Century Fox and director Steven Spielberg’s company, with production beginning sometime in 2009.