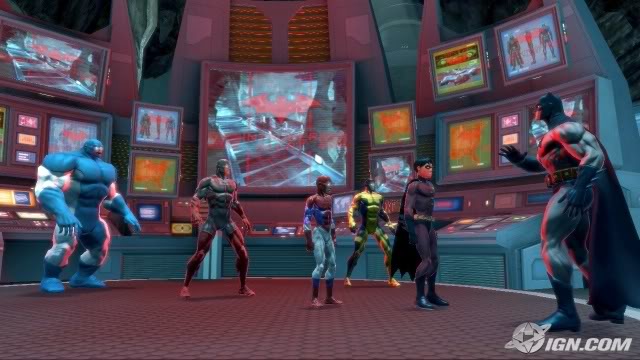 A few lucky folks at Comic-Con have been able to test out the MMO DC Universe Online, and reports are starting to come in about the gameplay experience.

Over at Newsarama, the game gets a positive early review:

The character I was playing was called Rockslide, who had earth-based powers (similar to Terra from the Teen Titans), a staff and – my favorite part – super speed. The controls are similar to other Playstation games, where the buttons allow you to perform basic movies – two different attacks, jump and pick stuff up – while holding the R2 button and hitting the buttons lets you access your various super powers. I had a proximity attack that blew the earth out from under my enemies, I could fire boulders out of my staff and I could make crystals pop up out of the ground under my enemies, causing damage.

The coolest part, though, was when I hit the right joystick and turned on the Speed Force. Throwing rocks at my enemies and slamming them with my staff was cool and all, but you’d expect that in any superhero-based MMO. Having my character run through the streets of Metropolis at super speed, trailed by what looked like the Speed Force that all comic fans know from the comics? That’s the kind of detail this game needed to really set it apart. And from what I’ve seen so far, it has it in spades.

Meanwhile, Newsarama also reported extensively on the panel and preview for the upcoming Mortal Kombat vs. DCU game.

Superman battled Sub-Zero in a ruined Metropolis, slowing the icy warrior with his freeze breath. Batman battled Scorpion in hell, trading Batarangs and grappling spears. Catwoman used her agility to get in a few bloody scratches on Shang Tsung. Finally, the Flash darted around Soyna, leaving her spinning and dazed before running her off a cliff, the pair trading blows all the way down before the Flash got the upper hand and whipped his opponent into the ground, creating a small crater.