Dabel Bringing ‘The Warriors’ to Comics 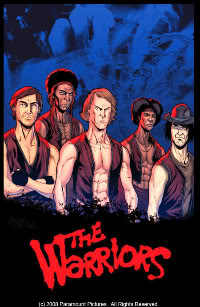 MTV has a new comics blog (wrap your brain around that), and already they have some interesting news.

The Dabel Bros. are going to be doing some original comic books based on The Warriors, that cult classic movie of a group of gangsters trying to survive a run through hostile gang territory… while they wear ridiculous leather vests.

With a tentative release date of early-2009, Dabel is already looking towards adding its own contribution to the Warriors mythos. “The plan is to do stories set before and after the movie,” revealed Ruiz. “We really want to flesh out the world and let you know even more about these characters.”

Ruiz promises two things: first, that the iconic gangs that inhabit the Warriors’ Manhattan will indeed grace the pages of the comic, and second, that nothing will be watered down for a younger audience. “We will be sticking to the movies vision,” he stated. “So the comic will be just as dark, gritty and violent. You will see the Warriors and the other gangs beat the hell out of each other. There’s no way we could do it justice if we ‘kiddy’ it up.”