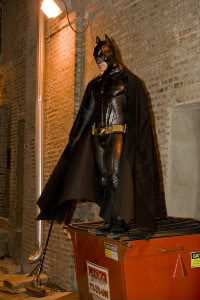 What do you do when you desperately want to make a Batman movie, except you have little film-making experience and Warner Bros. doesn’t know you exist?

Well, you just go right ahead and make a Batman movie. At least that’s the thought of Jerry Vasilatos, a Chicago director. He decided to create The Dark Knight Project, essentially a fan movie set between the two new Batman films.

The story follows some Gotham students who try to get video footage of their city’s new vigilante. The expected trouble ensues, as Joker’s gang starts to cause problems.

You can watch the film right here. You can also read quite a bit on the background of the project at Vasilatos’ blog, which is right here.

That "other" Batman movie opened this weekend.