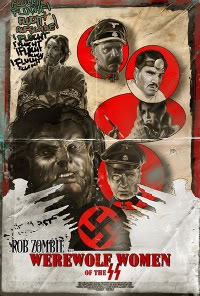 After the Grindhouse doubleheader films came out in theater, one of the big questions was whether any of the movie trailers for fake films would lead to real movies.

There’s no Machete on the way yet, but at least one of the properties will be expanded. Just not into a movie.

Cinematical reports that Werewolf Women of the SS, Rob Zombie’s contributed trailer, will be made into a comic book series. Zombie broke the news himself on his MySpace page:

Werewolf Women of the SS is back! This time it’s back as a comic book series! The wacky exploits of Commandant Hess, Lt. Boorman, Von Strasser Eva and Gretchen Krupp, Fu Manchu and even Hiltler will be coming you way. Everything you ever wanted to know about Project Pure Wolf but were afraid to ask!

No word on a publisher yet. Zombie previously worked with Dark Horse on The Nail and IDW on Bigfoot.