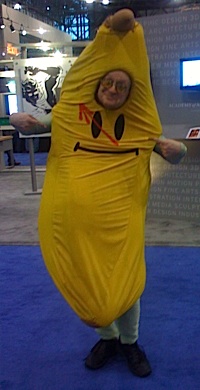 There really is no easy way to write an obituary, but it seems even harder to write one for a man who might be best known for going to comic book conventions in a banana suit.

A.J. Confessore, comedian and rock and roll interviewer, died this week at the age of 43. A staple of the New York City comics scene since his days at NYU, he is perhaps best known to many comics fans as CC Banana, who would attend comic conventions in attire not unlike what we have pictured on the right. I remember him most recently dressed up as a Wolverine banana– presumably a banana that sliced itself.

“A.J. was one of the most creative and driven people I had ever known,” said Manhattan Comics & More’s Robert V. Conte. “While working at Village Comics in the early 1990s, I recognized his ambition and talent.  We became friends quickly sharing our love for comics, Kiss and Star Wars.  That friendship lasted almost 21 years.”

“A.J. was one of a few whom, I believe, could handle anything thrown at him, ” says Conte. “Unfortunately, he was unable to conquer some unusual inner demons that plagued him for years.  It’s a shame because A.J. had so much more to offer this world.  I’ll miss him deeply.”

So will we all.