Review: Will Smith in ‘Hancock’ 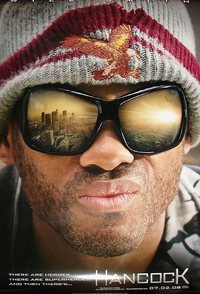 With comic franchises pouring from Hollywood’s every orifice this year, something like [[[Hancock]]] would normally be considered a breath of fresh, creative air. This can be said for the film on paper, but it fails to deliver in the latter half of the film. That said, Hancock is still good fun in a theater, and delivers with all the things we wanted to see Superman Returns

do time and time again, but never came through.

The plot follows an unruly asshole (not being vulgar, this term is important to the character) of a superhero who resides in downtown Los Angeles, attempts to keep people safe from the ever-rising crime rate, but ends up causing more damage than he prevents. This makes Hancock (Will Smith) the ultimate antihero, being hated by just about everybody in the world (or at least L.A.) He crosses paths with an up-and-coming Public Relations guru (Jason Bateman) who thinks Hancock can become the hero that the world needs, but with a little bit of help.

[EDITOR’S NOTE: The text of this review posted after the jump contains descriptions of significant plot points, so consider this your official SPOILER ALERT. -RM]

The first hour of the film is good fun and deals with the concept of “What if [[[Superman]]] was a real asshole?” while still keeping heart and humor intact. It’s the latter half-hour where things get muggy. There is a pretty big twist, in which we find out Smith isn’t “the only one of his kind” as we were originally told. It then takes a turn for the worse, in which we find out our hero[es] are actually gods who become mortal when they are close to one another. Hancock doesn’t know this because in his last spell, he received a blow to the head and suffered from amnesia (thinking his name was “John Hancock” when a nurse asked him for his signature). 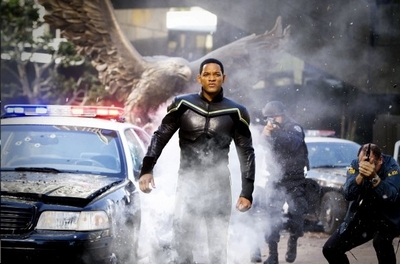 Understandably, Will Smith has a certain demographic in his fanbase, and this film attempts to walk the line of that group and the audience of diehard comic fans that will see just about anything with the term “superhero” in its plot description — even to the point of the ending, in which we get the classic [[[Spider-Man]]] ending, with Smith flying over the skyline to a John Williams-esque score, but then creturns with a final scene to show how “cool” and “street” the writers can be.

There are certain things one can look over in the movie, including the microcosmic world of L.A., and why “the world’s only superhero” would never go outside the city’s walls — or why we never learn Hancock’s true name. Things like these can be forgotten, because the majority of the film really is fun, and exactly the visuals you expect when seeing a good superhero film.

On the more technical side, the acting is what you would expect from every party. Bateman pulls off the awkward dialogue-driven scenes, Charlize Theron comes through with a wide range of emotions, and though many expected this to be Will Smith’s “return to the comedy genre,” it was hardly that. Smith plays the stone-faced brute from beginning to end, while it is others around him who get stuck with the Jerry Lewis shtick. The effects were done well, but with no real basis of comparison like we have for other comic movies, the bar was lowered. 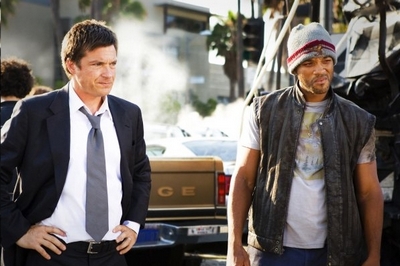 Overall, the film delivers with action, heart, and laugh-out-loud comedy for a good hour, but when they try to offer up smoe explanation for this world of superheroes, I couldn’t help but cringe. Peter Berg is a great director regardless, and he makes sure that even though the story takes a tailspin into “WTF?” valley, the audience still walks away with a better feeling than after some other comic book films made in the last few years. (I’m looking at you, Superman Returns.)

Hancock hit theaters this week for the holiday weekend.