Review: Futurama – The Beast with a Billion Backs 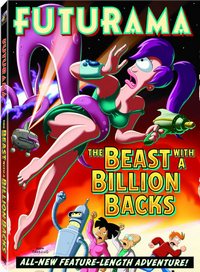 ’s next title certainly fills the void that series junkies need but can’t get from running their season DVDs bare. And while “[[[Beast with a Billion Backs]]]” is certainly not as deep or emotional as “Bender’s Big Score,” there is definitely enough to keep you entertained for 90 minutes.

The premise of the “movie” (which is technically four interwoven episodes) begins up with a tear in the sky, seemingly to another universe. When panic ensues and the world’s two smartest minds battle it out to figure out who gets to explore it first, our hapless hero, Fry, jumps in the hole and stumbles across something Earth-shattering. There are several other subplots that all come together in the end a la [[[Seinfeld]]], but the main focal point is this interdimensional “beast.”

Each of these films seems to have a central theme, and if the theme of “Big Score” was time travel and friendship, the theme here must be love and jealousy. Even stated by Bender in the film: “You can’t have complete love without complete jealousy,” which may be poetic, but is still hilarious. The structure follows that of a cheesy romantic comedy, while still mocking itself by having the “romance” occur between the titular beast and every being in existence. (It’s your typical “beast meets everybody, they fall in love, everybody feels betrayed, they break up, then try to fix the relationship” story… but with robot pirates.)

A lot of this movie is structured for the diehard [[[Futurama]]] fan, with references to the original series ranging from planet names to obscure, throwaway lines. A peripheral fan would still appreciate appearances from such favorites as Zapf Brannigan, the Robot Devil, and even Uncle Zoid. Don’t underestimate the writing, though, as there will still be laughs had by first-time viewers of the show. Heck, there’s even some heartbreak and betrayal in the film when a popular character dies — well, sort of dies.

We get our usual motley crew of voice talent for this story, with special credit to Billy West for lending his voice to just about every character outside of the core cast in the entire universe. Coming along for the ride for the first time is David Cross as “The Beast,” Brittany Murphy as Fry’s polygamist girlfriend, Colleen, and even Stephen Hawking as himself. And though we get a special appearance by Dan Castalleneta as The Robot Devil, with almost a dozen episodes under his belt, it almost feels like he’s a part of the Futurama crew these days.

Overall, “Beast with a Billion Backs” may not give you the same warm, wholesome feeling that “Bender’s Big Score” left you with, but it still fills the Futurama void, and gives you the character-driven humor and quirky puns that will certainly hold you over for the next few months while we wait for “[[[Bender’s Game]]]” in the beginning of next year.

Futurama: The Beast With a Billion Backs is scheduled for a June 24 release.