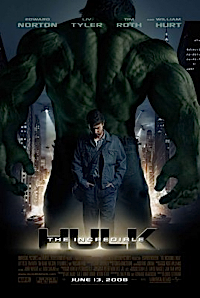 Going into this film, you will need to play a bit of a trick on your brain. You need to completely forget everything you experienced in Ang Lee’s 2003 version of the film, while still comparing this film to its predecessor.

, but you shouldn’t do that — this is a whole new beast (pun intended) and needs to be treated as such.

That said, this film certainly delivers for the franchise, with the only major problem being the anticlimactic fight scene at the end, but we’ll get to that.

Starting off, the abbreviated back-story of this film is given to us in the form of the opening titles. Changing from the books: there is no Rick Jones and no Gamma Bomb, but instead a quiet gamma test on our Dr. Bruce Banner that goes horribly wrong, causing him to “hulk-out” and destroy the facility while also injuring his assistant/girlfriend Betty Ross. He goes on the run from the government, and we come into the story a few years later in Brazil, where Banner has now gone five months without “incident.” The first 15 minutes of the film keep the audience well entertained without the need of the Jade Giant, with some great character development and a fair amount of humor.

On the critical side of things, the biggest change from the first film was easily the look of the hulk and computer-generated imaging throughout the film. This was a drastic change from 2003’s “Shrek on Steroids” look. We’re given plenty of shots of the hulk in plain daylight and in action, and the look is next to flawless. If you are not a fan of CGI to begin with, you have to understand that you are going to see a movie about a gigantic green monster here, and no one is throwing Lou Ferrigno in green makeup this time around.

On paper, the pedigree of actors in this film automatically raises the bar, and I’m pleased to tell you they live up to those expectations in the film. Edward Norton comes through as the tortured soul Bruce Banner, while still coming into his role as a “hero” by the end of the film. Liv Tyler makes you want to get infected with gamma radiation, just so she will have the same blind compassion for you as she does our protagonist. William Hurt pulls off General “Thunderbolt” Ross with flying colors here, which is hard to believe, seeing as how the only thing making 2003’s [[[Hulk]]] worthwhile was Sam Elliot’s portrayal of the same character. Tim Roth is a great bad guy here as well, but his motivation for destroying Harlem is abit unclear. We also get great supporting roles from Tim Blake Nelson as a possible villain for the next movie, but I’ll leave that for you to discover.

One of the big “behind the scenes” issues with this film was the rumor that Edward Norton, who had rewritten Zak Penn’s original script, wanted the film to be more about Banner’s tortured soul, rather than, well… “Hulk Smash.” This was an issue with the studios involved, and by extension, Director Louis Leterrier. It’s no secret that this same issue was one of the biggest controversies surrounding the first film, and we all know how that turned out.

Ultimately, the studio won, and a good amount of scenes were cut — even an entire character. Betty Ross’ new beau, Leonard (Ty Burrell) was originally supposed to be named Leonard “Samson.” Those of you who remember the first trailer released a few months ago should remember a “therapy scene” with Banner and “Doc” Samson — a major character in the Hulk mythos. However, this was completely cut out of the film, and Burrell’s role was reduced to two scenes and about four lines. Sure, it’s upsetting that this happened, but it was probably a good decision with regard to the pacing of the film.

Speaking of that aspect of the film, [[[Incredible Hulk]]] certainly keeps the heart racing for about an hour and a half. The fight sequences are well done and keep you rooting for the Hulk all the way through.

Unfortunately, this brings us to my biggest issue with the film: the final fight scene. Most (if not all) final battles in superhero films tend to follow a certain formula — whether it’s the down-but-not-out hero or the hero who takes the things he’s learned since the beginning of the film and utilizes them to vanquish his foe. This film left the final battle wide open for either of these formulas, yet it decides to use neither in the end.

In the beginning of the film, Banner is a student of Jujitsu, using the martial art as a way to calm his heart rate. This doesn’t come into play at all later on, except for a throwaway line. Also, right before the final fight, Banner undergoes an experiment to suppress the gene that unleashes the hulk, and again, except for one throwaway line, this isn’t brought up again. Granted, watching Hulk and Abomination destroy Harlem was entertaining, and they certainly go punch-for-punch when the Hulk isn’t trying to save Betty, but there was no overwhelming action that made us believe that “Hulk is the strongest one there is.” He only outmaneuvers his foe at the very end, and even then, doesn’t kill him (which I suppose works to humanize the character and fit the film’s PG-13 rating). Either way, I expected a little more for the final fight sequence, and was left wanting.

Finally, if you are going to see this film purely because you are a Marvel nut, or even a fan of the original television series, you will be pleasantly surprised. There are more than a few clever nods to the show, and plenty of Marvel references. Those of you who saw the latest television trailer already know that Robert Downey, Jr. makes a cameo in Incredible Hulk, but the strange part is that the scene was placed before the end credits, not after. This could have been for the advanced screenings only, but I feel that the post-credit sequence adds to the experience, and needs to be used more often in situations like this.

All in all, is this film superior to its 2003 predecessor? Definitely. But does it live up to the standard set by [[[Iron Man]]]? Sadly, not even close. This was a great film, and it should satisfy the comic fans while also keeping filmgoers less familiar with the character entertained for a good 90 minutes. I do recommend this film, and yes, Hulk does indeed smash.