Here’s what’s been going on in the world of comics over the past few days to give you some Monday afternoon I-don’t-feel-like-doing-any-real-work reading. 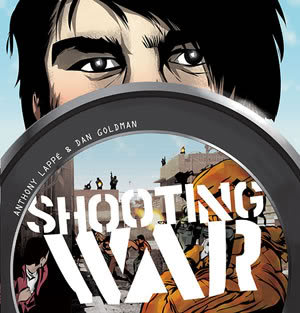 In an interview with the Toronto Star, Shooting War illustrator Dan Goldman talks about why he doesn’t draw Spider-Man:

"I could be doing that kind of stuff, but … I feel like you’ve got a microphone; if you’re going to step up, you really should have something to say."

Goldman is concerned with what he sees as the degradation of the United States. "I have my days when it’s tough to look over at my desk and see my little American passport and I feel ashamed."

You may have heard about the sad news out of Seattle, where a man’s collection of about 6,000 comics was stolen from a friend’s house. The case is now closed. The original owner tracked down the thief, got back his books, and no one was arrested. Priceless quote from the police spokesman: "We didn’t want to spend any more time on it,"

Buried deep in this CNN story about singer/songwriter Aimee Mann (you probably know her from the Magnolia soundtrack) is the news that she’s slowly become a graphic novelist: "I take a sketchbook and I bring it out at dinner … and I’ve got this one friend who always says something ridiculous, so I’ll try to write it down and put it in [graphic] form, and it kind of amuses everyone at the dinner table," she says, while saying it’s "kind of a long-term project."

Lastly, Lost writer Javier Grillo-Marxuach reveals to Comics2Film that Paul Dini is responsible for Grillo-Marxuach’s The Middleman going from proposed TV series to comic (and now it’s set to be a TV series again): "Of course, I was a huge comic book fan already, but something about talking to Paul and realizing here’s a guy who’s doing it sort of inspired me to say, ‘Here I have a property that, in a comic book, without the constraints of budget, would be spectacular.  So why not go in that direction and try to fulfill this creative need that I have to see this thing made?’"