War is the topic du jour in comics this week, with battles breaking out or warming up in darn near every issue. But instead of mindless battling, most of this week’s comics gave a deeper look into the costs and reality of violence. A reflection of our times, perhaps? 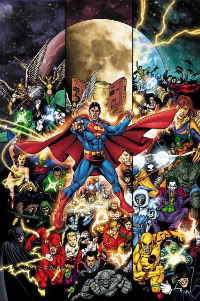 Book of the Week: DC Universe #0

— A very good issue, though not on par with Countdown to Infinite Crisis

, which was a more lucid preamble to a big event. But that’s to be expected with Grant Morrison, who sets up Final Crisis with a series of vignettes that introduce the personal hell in store for many heroes.

The narration — leading to a very well done reveal that I won’t spoil — is appropriately vague and ominous, letting us know that storm clouds are brewing (though without falling into such cliché). The issue appropriately establishes the seriousness of the war on the horizon, though the elements of that war remain opaque.

While DC still has a lot to make up for after the painful Countdown, this issue goes a long way toward that end, not so much picking up from Countdown #1

as hitting "reset" on it.

The best scene is that with Batman and Joker, a meeting that starts out almost exactly like all of their interactions at Arkham, then twists in a new, foreboding direction. The layouts, which are extremely creative if not consistent, offer another highlight.

In the long run, though, this issue is only as good as the event that follows it.

Elephantmen: War Toys #3 — In what could be just an excuse to draw some cool human-animal hybrids fighting with big guns, this series has offered a very solemn look at war. The Elephantmen are next-gen Hessians in a war between humans, and their animal instincts lead to atrocities.

It’s a gruesome reflection on how people wage war, that in battle humans become as ferocious and bloodthirsty as animals. A female guerilla soldier opposing the Elephantmen, Yvette, serves as the point of reason in this tragedy, her life in exchange for the animals gaining some humanity.

— The latest Skrullapalooza prequel that actually came out after Secret Invasion #1is a very worthwhile read, and manages to overcome its tardiness. In Mighty Avengers #12

and now this, Brian Michael Bendis has illuminated some of the anciliary issues to the big war between Skrulls and Earth, with this issue focusing on the Skrulls.

Giving motivation to villains is key to making a great comics event, and the plight of the Skrulls becomes very relatable, as does their turn toward religious extremism and their hatred of earth’s heroes. He loves you indeed.

Blue Beetle #26 — No warfare here, just a top-notch breather issue. The "Spanish-language issue" thing could have been a painful gimmick, but writer Jai Nitz crafts it in a way that’s not just believable but even necessary to Jaime’s character. Jaime’s Spanish-speaking relatives are relentlessly fun and fully realized, their interactions ringing true at every turn. While the fight with Parasite is entertaining, the non-hero moments make this issue a contender for best of the week.

The Immortal Iron Fist #14 — Here we go, back to war! Danny Rand and pals face off against the mysterious Xao and his legion of Hydra henchmen (oh, and that crazy electromagnetic train) in the war to save the Seven Cities of Heaven. Series artist David Aja is MIA, but the replacement team does a serviceable job. A fun read, but the battle is never once in doubt as Hydra goons fail (as always). Some great moments, though, and a nice set up for the next run. An Eighth City?

Ex Machina #36 — This series gets back to the roots of its first storyline, as Mayor Hundred is forced to deal with one person’s public expression that’s bound to offend much of the constituency. The real story, though, is about how different people handle their dislike of President Bush’s policies, with a zany protest chick serving as the extreme counterpoint to Hundred, who’s forced to internalize his feelings. Why? Newly revealed ambitions. 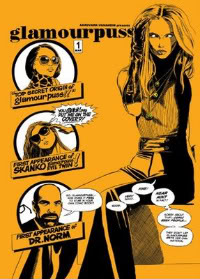 Green Lantern #30 — Just like last issue, the area of interest remains Abin Sur and the Darkest Night prophecy, though that storyline continues to get short shrift as Geoff Johns retells Hal Jordan’s origin. The problem is that Jordan’s origin has been told some million times. Sur’s background is largely an unknown. The highlight here is the slick way Johns brings a young Sinestro into the story.

I Was Kidnapped by Lesbian Pirates from Outer Space #1 — For a book that contains literally everything listed in the title, it’s a bit of a disappointment, always straining so hard for jokes that the humor feels unnatural.

Action Comics #864 — Lightning Lad is back, Legion members are showing up dead in the past and the Time Trapper is out looking to do some damage. Some decent elements, though it’s way too slow and only further illustrates how convoluted the Legion history is. Johns hints at a reasoning behind that murkiness, though, so maybe this is worth keeping an eye on.

— This remains an absolutely fun, beautifully illustrated series, with this issue building up some personality clashes amongst the very different Titans. The only problem is that it just isn’t a Year One book, and anyone expecting that kind of a series will come away disappointed.