These three books have almost nothing in common – they’re from three different publishers, in entirely different genres, and by very different creators. But they all are middle chapters in long-running series, so they raise similar questions about maintaining interest in a serialized story – when the beginning was years ago, and there’s no real end in sight, either, what makes this piece of the story special? (Besides the fact that it’s printed on nice paper and shoved between cardboard covers.) 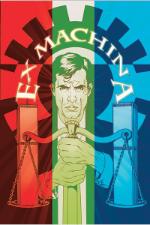 Ex Machina gets to go first, since it’s the shortest and it’s also the closest to the beginning of the series. (Both in that it’s volume 6 and because all of the [[[Ex Machina]]] collections are so short – this one collects issues 26 to 29 of the series, so we’re only into the third year of publication.) The premise is still the same – an unknown artifact/item gave then-civil engineer Mitchell Hundred the power to hear and command all kinds of machines, which he used to first become a costumed superhero (stopping the second plane on 9-11, among other things) and then successfully ran for mayor in the delayed election of 2001-2002.

This storyline begins in the summer of 2003, and provides a secret-historical reason for the blackout of that year. (This is too cute a touch for my taste – Hundred’s world is different enough from our own that this “explanation” couldn’t be true in our real world, and so the fact that both worlds had identical-seeming massive blackouts, on the same day, from different causes, stretches suspension of disbelief much too far.)

But [[[Power Down]]] does advance the overall plot of Ex Machina, which I’d been worried had stalled. Though it’s never said explicitly, it’s clear by the end of this book that Hundred’s world is just one of many in a multiverse, and at least one world has the ability to travel to others. (There’s also more than a hint of rapaciousness reminiscent of H. Beam Piper’s classic [[[Paratime Police stories]]].) It’s also clear that whatever caused Hundred’s transformation came from an alternate world, and that his use of it will inevitably draw more attention to his world – and from worlds that are more advanced and no more ethical.

I hope Ex Machina doesn’t turn into a story about paratime war, which now seems to be a possibility – that wouldn’t work to the strengths of either the storyline or the characters – but, on the other hand, that Chekhov Gun has now been taken down and inspected in full view of the audience. It now needs to be fired before the powder gets all wet and we wander off, one by one, disappointed.

B.P.R.D. has an even knottier problem – it’s a side-story to Hellboy

to begin with. So it’s exceptionally unlikely – even more so than in any other work of popular fiction – that the various ravening horrors that the Bureau for Paranormal Research and Development fights will manage to conquer Earth and enslave or devour mankind.

(Although, if anyone was to let humanity get eaten in his work, it would be Mignola.)

[[[Garden of Souls]]] continues B.P.R.D.’s pattern of stories focusing on the secondary characters of Mignola’s invented world. Previous volumes have told us more about the lives of the pyrokinetic Liz Sherman and the now-dead homunculus Roger. This time, we finally learn the secrets behind the second-best-known member of the B.P.R.D., the amphibious man Abe Sapien.

As usual, Abe’s past is entwined with a current supernatural threat to the world, which he has to defeat just about single-handedly. Of course, that’s just an ordinary day in the B.P.R.D..

Guy Davis’s moody art, with its many sketchy, almost tentative lines, is still a great match for Mignola’s world, and Mignola and co-writer Arcudi keep that world consistent with all of the many other stories told in it over the years.

B.P.R.D., since it doesn’t have an over-arching story to begin with, can be free of the usual problems of a long-running series – each volume can tell its own self-contained tale, and leave the longer plots to Hellboy. I’m not sure I’d recommend this volume as the best starting place for a new reader, but it’s certainly accessible enough for one – which isn’t true of Power Down, or of most middle volumes I could name.

This piece looks even more middle-y and expendable than most; it’s the last collection (at least for now) of the [[[Queen & Country]]] comic-book series, and it collects a story that takes place in between the two “Queen & Country” novels, A Gentleman’s Game

(2004) and [[[Private Wars]]] (2006). Since it’s now two years after Private Wars was published, there’s not even any suspense about the ending of this story. So how much tension can Rucka wring out of having his series character Tara Chase abducted by Iraqi gunmen?

Quite a lot, actually…

As [[[Operation: Red Panda]]] begins, Chase is in disgrace, having been dragged back to London after some kind of Saudi Arabian mission that went badly wrong. (This must be the events of [[[A Gentleman’s Game]]]; all we really find out about it here is that things were very messy and that Chase accidentally killed her former colleague and lover Tom Wallace.) She’s clearly suffering badly from a post-traumatic stress disorder, and her superiors are loudly disagreeing with each other over whether she’s fit to go back to duty.

In typical Q&C fashion, the arguers make an underhanded deal with each other, and Chase is reinstated as “Minder One,” the head of the in-the-field wet-works division of the British spy business. (And, honestly, did anyone think that this volume was going to be Tara Chase slowly and quietly getting back on an even keel through psycho-therapy, long exercise sessions, and relaxation? Those aren’t the elements of any spy thriller I know…)

More corrupt bargains – Q&C’s main plot motivators – follow, as the Americans wheedle the British into doing a hit for them in Iraq. Chase is sent with another agent to do the dirty work on-site, and, well, I gave away the fact that she ended up being abducted in my first paragraph. She is, and things get worse from there.

Given the existence of Private Wars

, we all can assume that Tara Chase survives to the end of Red Panda, but Rucka does find a few more ways to torment her before this story’s over. (Queen & Country, more and more, seems to be a series about how much evil shit a spy can take before she either quits or dies – and Chase has a very high tolerance for evil shit.)

I can’t see anyone jumping onto this series at this point, but fans of nasty spy stories could easily start either at the first volume of the comics – [[[Operation: Broken Ground ]]]– or with the novel A Gentleman’s Game (which is both cheaper and will take longer to read, if either of those things matter) for stories of really appalling things going on at the sharp end of foreign policy.