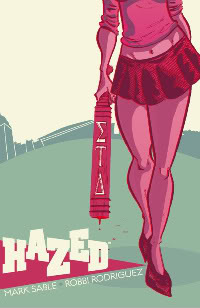 I was talking to Alex Robinson recently about a new book he’s doing about teenagers, and he said it was more challenging than he expected to write scenes with teens, because he wanted them to be as real as possible – not like the Hollywood stereotype.

In their new graphic novel Hazed

, writer Mark Sable and artist Robbie Rodriguez head in the exact opposite direction. They start with the Hollywood cliche and give it a good shove further along into self parody.

The story follows suit, a mix of Heathers

with a dose of amphetamines. Ileana is a high school girl who hates the role sorority girls take on at college (as she sees it), but after going to college she decides to join a sorority and tear it apart from the inside.

This involves plastic surgery (extreme!), while those not picked for the sorority literally kill themselves (even more extreme!). The point that Sable wads up and crams down our throats is that sororities are awful institutions, unintentionally transforming women into image-obsessed sluts.

There is some kernel of truth to that, although the sorority girls I knew through college were nothing like the "sorostitutes" (my term) of Hazed. While the book is an interesting excercise in excess, it’s disconnection from reality (and some poorly constructed plot points) puts it in the company of Thomas Wolfe’s I Am Charlotte Simmons

, another book that failed in its aspirations to pull back the curtain on collegiate misbehavior.

You can read the first chapter of Hazed at MySpace Comics.