Review: ‘The Man Who Shot Liberty Valance’ and ‘El Dorado’ on DVD 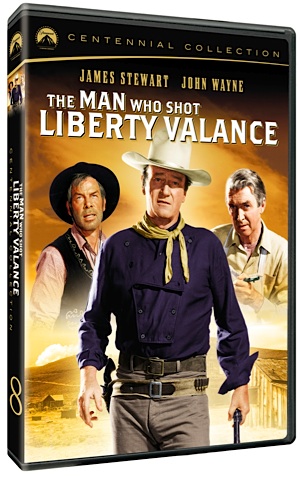 The Western movie genre is something most of us consider a relic from the 1950s, and yet, two of the better regarded films – The Man Who Shot Liberty Valance

– are products of the 1960s, even though they feel older given the changes to American cinema in that decade. Both movies, coming out Tuesday as part of Paramount Home Video’s Centennial Collection, are both solid and entertaining.

The former may be best recalled for line, “This is the west, sir. When the legend becomes fact, print the legend.” It stars James Stewart and John Ford playing entirely different kinds of men of the west. Wayne was a rancher, a fairly decent sort but narrow-minded, prone to jealousy, and believed using a gun was essential to surviving on the frontier. Stewart, a lawyer by training, came west to start his career. Both loved Hallie (Vera Miles) and had no stomach for the cruel bandit Liberty Valance (Lee Marvin). The story involved the battle over the unnamed territory becoming a state and climaxed at a nominating convention, where the learned lawyer was named to represent the locality putting him on a path to his becoming a senator and governor.

We learn all this from the framing device, which has the older Stewart and Miles coming back to Shinbone to attend Wayne’s funeral. Stewart is coaxed into telling the local newspaper editor why this man meant so much to the Senator. We then go back to when things were rough and education was a luxury few could afford to devote time to.

John Ford’s black and white production barely moves the camera but his characters are so full of life that you can’t take your eyes off them. He makes certain that everyone who speaks is full of life or quirks, adding a subtle energy to the overall production. The values of the old west are clear although we never do know why Wayne kept calling Stewart, “[[[Pilgrim]]].” Wayne allows his Tom Doniphon to be shaded, and downright unlikeable in some sequences, but fair-minded, especially when it came to treating others, including the African America farmhand played by Woody Strode. 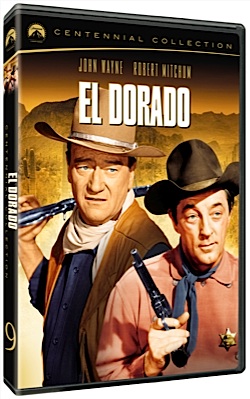 On the other hand, Howard Hawks’[[[El Dorado]]], shot five years later and in full color, is a bigger story, played out on location and feels entirely different. His characters, though, are stoics and barely exhibit much emotion.  When John Wayne accidentally kills Luke McDonald (Johnny Crawford), the McDonald family barely nods in acknowledgement. This story is also about land rights, as the black-hatted Ed Asner hires gunmen to force the McDonalds into giving up their water rights. The Sheriff (Robert Mitchum) has become a drunk over an ill-fated romance and it takes his old friend, mercenary John Wayne, accompanied by the tyro James Caan to help maintain law and order.  The professional rivalry theme plays out between Wayne and Mitchum, both showing their age here, but also between Wayne and Christopher George, the gunhand newly arrived to aid Asner.

This is far more of an ensemble story, similar to [[[Rio Lobo]]] and [[[Rio Bravo]]], considered today a Hawks trilogy, but at least the two female leads play strong characters. The actresses – Michele Carey and Charlene Holt – are both quite good and new to me. Nelson Riddle’s score also gives the film a more contemporary feel.

While a country struggled through the 1960s with social and political upheaval, people flocked to the movies to get away from their troubles, and delighted in seeing America when things were simpler and the issues were pretty clear. Ford and Hawks, both in the twilights of their careers, both rise to the occasion.

Each disc comes with a multi-part documentary on the making of the movie and pay tribute to the directors. El Dorado also has a short archival film, [[[The Artist and the American West]]], along with A.C. Lyles reminiscing about Wayne. Both come with still galleries including the lobby cards and publicity surrounding both features.