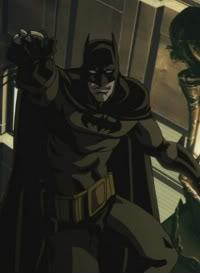 Warner Brothers just sent out a press release announcing that the rest of the cast has been finalized for this summer’s Batman: Gotham Knight direct-to-DVD animated film.

Earlier, fans collectively breathed a great sigh of relief upon hearing that Batman: The Animated Series alum Kevin Conroy had signed on to voice the Dark Knight. Instead of filling the ranks with big-name stars (see Justice League: The New Frontier and Superman/Doomsday), WB picked up some lesser knowns to round out the voice talent.

Read the release carefully and you can pick up a few hints about the plot:

Gary Dourdan (CSI: Crime Scene Investigation) and Ana Ortiz (Ugly Betty) are heard in multiple segments of the six-story film as police detectives Crispus Allen and Anna Ramirez, key members of a special unit who learn to trust the Dark Knight’s motives. Parminder Nagra (ER, Bend It Like Beckham) supplies the voice of Cassandra, a mystical Indian woman who teaches Bruce Wayne to endure and manage his pain. David McCallum (Navy NCIS, The Man From U.N.C.L.E., The Great Escape) takes on the role of loyal servant Alfred. George Newbern (Father of the Bride) and Alanna Ubach (Legally Blonde) also join the cast.

The bonus features on the double-disc release include a documentary on Bob Kane, a documentary about Batman’s villains, some of Bruce Timm’s favorite episodes from Batman: TAS and a sneak peak at the upcoming Wonder Woman animated film.