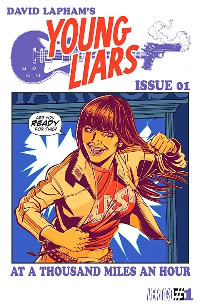 I covered a handful of new series debuting this week in my Weekly Haul column earlier this week, but one new series slipped past. Thanks to the kind folks at DC then for sending over the first issue of David Lapham’s Young Liars

, one of the more puzzling series to come around lately.

It’s not that Young Liars reinvents the wheel. It’s actually very similar to another new Vertigo series, The Vinyl Underground

, in that both follow spunky young hedonists. The narrator is Danny, a Texas kid who moved up to New York to be a rockstar and failed miserably. But the central character is Sadie, an heiress who took a bullet to the head and lived, although the wound removed every inhibition she had.

The first issue is mostly set in a club, with Sadie alternating between dancing and beating the holy living snot out of people as Danny fills us in on the backstory. The gist is that Sadie’s dad and some unsavory characters are all tracking her down, and unpleasantness is about to meet this small group of friends.

While I was pretty disappointed with [[[The Vinyl Underground]]], [[[Young Liars]]] has at least piqued my interest. More than anything, I’m curious where Lapham is headed, but that’s based more on his past work than on the content of this issue. It’s more of a collection of fun pieces than a cohesive story so far, and it pales next to Lapham’s excellent Silverfish

File this one under too soon to tell.