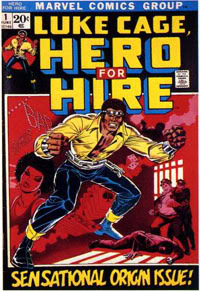 Wired.com’s blog recently posted this entry on the Online Museum of Black Superheroes, a Web site that compiles a fairly comprehensive list of black superheroes (as well as non-superhero characters).

The museum, which you can find right here, also contains a lengthy collection of articles on black characters in comics. The articles come from a variety of sources (from the Washington Post to Comic Book Resources) and while they don’t represent an end-all-be-all dissertation on black superheroes, they do offer a wealth of interesting discussion.

Simply reading through the character lists (they’re divided by publisher) offers plenty of opportunities for analysis. For instance, you can separate the characters by when they were introduced and look for trends. One thing I noticed was that while there were disproportionately more male characters than female ones, the division didn’t seem to be any more lopsided than the gender divide among white characters.

The site also documents some of the blatant racism evident in comics with characters such as Whitewash Jones (he appeared in the 1940s war comic Young Allies), and the unintentionally offensive, such as Marvel’s creation of Man Ape (he was a Black Panther villain).