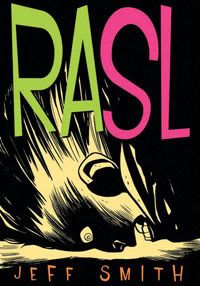 There’s something of a learning curve that comes with reading RASL, the new comic book series by Jeff Smith. After so many years of all-ages books like Bone and Shazam: The Monster Society of Evil, it’s a bit jarring to see Smith’s cartooning style appear in a book that’s so different from everything he’s done before.

The first issue begins with the protagonist (RASL is his "hacker tag," Smith told me in an interview) wandering through the desert, beaten and bloodied. While the immaculate linework may be reminiscent of Fone Bone, nothing else is. RASL is a dimension-hopping art thief (not to mention a fan of booze and cigars), and the issue quickly introduces him before laying out a string of hooks to catch readers’ interest.

There’s a great sequence where RASL thinks he’s returned to his home dimension only to look at a jukebox and see the album Blonde on Blonde credited to "Robert Zimmerman." "Dylan isn’t Dylan. Damn. I’m in the wrong place," RASL narrates as a shady figure lurks.

Smith also uses a much more complex narrative structure than in past books, revealing his antihero and a twisty back story through multiple time periods and dimensions. Such a structure can be unsettling for readers, but Smith handles it well. There’s a smooth cadence to his writing that bolsters the maturity of the material.

It’s still far too early to grade this series, but at the very least, it’s fun to see Smith continuing to develop as a creator and challenge himself even after he’s had a full and successful career.