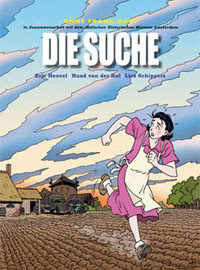 The New York Times has picked up on the debut of The Search, a comic book we reported on earlier this month being used in German classrooms to engage young students on the horrors of the Holocaust. In today’s story from Berlin, a reporter visits one classroom and sees how strong of interest the students are showing in the comic, even though it deals directly with the long forbidden topic of Nazis.

While some have castigated the comic (the story also references French President Nicolas Sarkozy earning criticism for wanting France’s youths to study the war’s victims), the article makes clear both how effective comic books can be in teaching children and how important the subject matter is.

The German children come across as not identifying with the Nazi history, but still interested in learning from it. There has been plenty of support for the book as well, as detailed in this story from the Web site Deutsche Welle. CNN has a video report on the book available here.

The Search was created by the Anne Frank Haus.