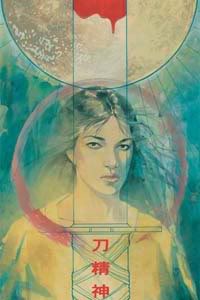 The news of Mike Carey writing a fantasy/horror comic set in Japan sounded too good to be true, and when Crossing Midnight

debuted more than a year ago it struggled to live up to that promise.

Carey created a deep and supernatural world to backdrop his story of mystery: Two twins, Toshi and Kai, were born on either side of midnight, leaving each with an otherworldly power and putting them at the mercy of dark forces. But Jim Fern’s stiff art and some uneven storytelling held the series back. When sales weren’t strong, the rumors of a looming cancellation kickstarted.

After the so-so showing of that first arc, I gave up on the series. But, when Vertigo sent over a copy of the second volume (the cover seen at right is from DC’s website, but isn’t the cover on the actual book), Crossing Midnight: A Map of Midnight

The volume picks up with Toshi, the female twin, struggling as a slave under an apparently evil spirit. She must fly through Japan at night, cutting unpleasant memories from people’s dreams and collecting them for some unrevealed purpose.

Following the archetype of most stories featuring children, Toshi’s impudence puts her and others into danger as she squares off against one of death’s faces. Perhaps because of the more fantastical nature of the content in this volume, Fern’s art loosens and adeptly adapts an ethereal tone. Later, Eric Nguyen takes over on art and, if anything, is an improvement.

Meanwhile, Kai stumbles onto a group of “telephone club” girls — early teens working essentially as prostitutes — and must help save them from an evil spirit that’s on the prowl. While this storyline feels a bit tangential to the larger theme, it is easily the high point for the series. Carey clearly has strong opinions of such clubs (he denounces them in a postscript) and how deplorable it is that they operate uncensored.

It is only then that the book goes farther than dipping a toe into Japanese culture, and Carey unleashes his horror-writing instincts. Sadly, the series seemed to be finding its footing just as the rug was being pulled out from under it. As Carey wrote on his Web site, [[[Crossing Midnight]]] will be wrapped up at issue #19.

Carey wrote that he knew a cancellation might happen, and all the plot threads will be wrapped up in that final issue.