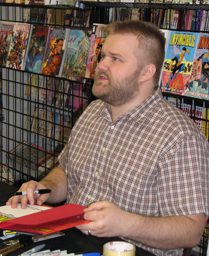 Free Comic Book Day started with a bang at Jim Hanley’s Universe in New York City last night – or was it a howl?  Robert Kirkman (Invincible, Marvel Zombies, The Walking Dead) was on hand to launch his new book The Astounding Wolf-Man.  The signing is the first of a series of five appearances across the country this weekend to promote the new book.  “If giving the book away for free doesn’t work, I don’t know what will,” said Kirkman.

Kirkman described his new book as “An action-packed superhero romp.” The crowd that packed the aisles of Jim Hanley’s Universe were certainly eager to pick up the premier issue.  Now that he has a book on zombies and a book on werewolves Kirkman said, “I think I’d like to do mummies.”

With comic book properties especially hot right now Invincible has been optioned by Paramount.  “I’m working on a draft of the screenplay right now.  There’s no casting yet.  No director either,” said Kirkman.  For those with more of a zombie jones Kirkman said, ”There’s interest in a The Walking Dead movie.  My agent is listening to offers all the time.  We’re waiting for the right one to come along.”

We asked him why he thought zombies were so hot these days.  “People like zombie comics when they’re afraid.  The last surge in popularity of zombie comics was at the height of the Cold War.  Now the war on terror has the same atmosphere.  The media is full of fear,” said Kirkman.

As for what’s next, “The Walking Dead and Invincible are both going strong towards issue 50, that’s pretty exciting.  Marvel Zombies 2 is also about to get going,” said Kirkman.