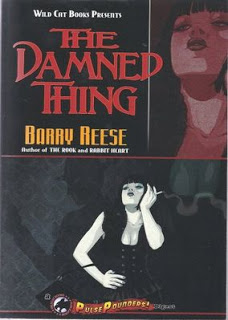 Pulp writer Reese takes a stab at turning Dashiel Hammetts’ classic “The Maltese Falcon” into an occult thriller with delightful results.  Instead of tough guy private eye, Sam Spade, he gives us tough gal, Violet Cambridge.  She’s a widow whose husband, Walter Cambridge, was killed on a case and rather than seeing the offices of Cambridge and Knopf shut down, she assumes his position in the company.  Violet has no qualms about shooting first and asking questions later.  Always dressing in mourning black, she is a femme fatale who is perfectly at ease using her feminine wiles to achieve her ends; a true Black Widow in way.
When her partner is cruelly murdered by an occult sect in search of an ancient artifact said to possess immeasurable power, Violet takes up the hunt for “The Damn Thing” to solve his death and bring them to justice.  Along with way she soon discovers there are several other factions competing with her.
There’s a religious order, dedicated to finding the cursed statue for the sole purpose of destroying it while the world famous occultist, Aleister Crowley, represents those seeking to possess it for their own twisted ends.  During this danger laden hunt Violet discovers it was this very affair that led to her husband’s murder.  From that point on, the case becomes a personal vendetta and nothing is going to stop this Atlanta based, strong willed investigator from uncovering the truth, no matter who she has to shoot to do so.
A fan of Reese’s work for several years now, this reader believes “The Damn Thing” is by far his most polished story.  As a writer he continues to grow and the prose here is smooth, economic and effective.  There’s no wastage of words to get the tale across with as much power and drama as it requires with not a superfluous sentence more.  It’s fun, suspenseful and introduces one of the classiest dames in fiction since Honey West.  Here’s hoping there’s lot more Violet Cambridge in all our futures.