As the year winds down, it is common for wags to predict what is going to happen during the next twelve months. Quite frankly, I find these efforts to be almost always wrong and often ridiculous. However, that usually applies to politics and not to comic books, so this year I’m whipping out my crystal ball and I’m going to predict away.

Mind you, there is absolutely no effort behind this. Each of these are so predictable you wouldn’t be surprised to find them inside a stale fortune cookie. Which is my point. I thought I’d get that out of the way right quick.

I am going to restrict myself to Marvel Comics circa 2017. This is solely because DC Comics did the right thing and admitted The New 52 didn’t work, and Marvel has yet to own up to Civil War 2. Also, it’s about time ComicMix gave Dan DiDio a pass.

Even though they’re numbered, they are in no specific order. Ready?

Sorry, Sam Wilson, but you knew this would happen. Steve Rogers is Captain America, and that has nothing to do with race or age or even skill. Just as Dick Grayson will never be the permanent Batman, even though a couple hundred other people seem to be right now (sorry, Dan; old habits die hard).

Action figures simply do not look good in Armani. I’m not saying Vic will return to his totally evil ways in 2017 – we might endure a Magneto-like moral ambivalence for a while. That’s kind of a shame as I’m enjoying the current storyline, such as it is. However, this will happen because…

Of course he will. Maybe not until after the next Avengers movie, but Tony Stark is Iron Man and that’s that. The movies turned him into an A-list superhero, and swapping out the human inside the can won’t work. Besides, they already gave his teenaged replacement her own code name.

(A digression, common to ComicMix columns: why are they called “code names?” If you just said “Tony Stark” on an Avengerscom, both SHIELD and Vlad Putin would immediately know you’re talking about Iron Man.) 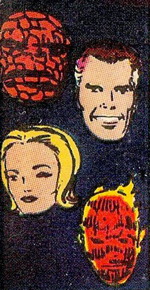 There are several reasons why this will happen. Marvel Master Ike Perlmutter can’t stay in his petulant frenzy forever, and his energy will be divided when the Republican Party finally decides his buddy Donald Trump is too much of a pain in the ass.

Also, The Thing is running out of super-groups to join. Everybody is in The Avengers, and everybody is in SHIELD. But only four people can be in the Fantastic Four (duh!) and The Thing always has been the most popular. 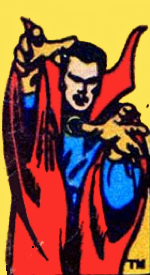 Doctor Strange might just be my favorite Marvel character (Sub-Mariner gives him a run for his money in my fevered pantheon), but he has rarely been able to support one monthly title, let alone two. Or more; it’s so hard to tell these days. Yeah the movie was big (and great), but there’s no relationship between the number of titles a property can support and the long-term impact of a movie franchise.

Besides, there isn’t a Doctor Strange movie franchise per se. There is only the Marvel Cinematic Universe franchise, which may or may not extend to their many teevee shows. This is why you will probably pay to see the next Spider-Man movie but you will think twice about the next X-Men team movie.

O.K. These are truly no-brainers, supported by the overwhelming weight of history and a bit more logic than is safe to apply to the comics field. But comics are now acceptable and are big business, so the role logic will play in future decisions just might increase. Eventually.

That’s a shame. Legitimacy takes all the fun out.

Mike Gold: They Aren’t So Fantastic…

There has been a debate amongst comics wags that the rumor about Marvel cancelling their flagship title, Fantastic Four, during their 75th anniversary celebration was just that – a rumor. Marvel/Disney couldn’t possibly be that petty. Bleeding Cool.com‘s Rich Johnson, who carried the story, steadfastly stood behind his sources. Good for him.

Evidently, Marvel wasn’t happy with how 20th Century Fox was treating the property in the forthcoming movie reboot, they didn’t want to support it and so were cancelling the comic book. OK, but would they cancel all those X-Men titles if they didn’t like the way Fox handled their latest X-movie? Of course not. Nor did Marvel cancel the Spider-Man titles despite the atrocious way Columbia handled the Spidey flicks of late – and they’ve got release dates for three or four more.

To be fair, compared to the profits of the X-Men comics or even the (fewer in number) Spider-Man comics, the revenues racked in off of The World’s Greatest Comic Magazine are a fart in a blizzard. Even so, it just seemed real petty.

As it turns out, Rich was right. Kudos, pal. But it’s a damn shame anyway. Historical affinity aside, James Robinson was settling in nicely on the series and he’s one of our medium’s best writers.

Prior to this brouhaha, some cast members of this forthcoming FF flick were saying it wasn’t really based on the comics, it was an “expansion” of the concept, it wasn’t comic book shit, it’s goddamned art and they wouldn’t be associated with lesser trash. Yes, I’m wildly paraphrasing, but not out of my long-acknowledged love of the Stan Lee – Jack Kirby creation. No, I’m crabby about this because it’s a stupid business decision. Haven’t they seen any of the Marvel Studios movies? The recently concluded Batman trilogy? Any of those Marvel and DC shows on television right now?

All of these shows have one thing in common: they treated their source material with respect; Marvel Studios more than DC/Warner Bros., but at their worst neither ever distanced themselves from the comics.

Heaven forbid 20th Century Fox should have a movie as entertaining and as profitable as Guardians of the Galaxy – and that movie wasn’t based upon a comic book series that has been published since 1961. In fact, few civilians ever heard of the Guardians.

Now we have what, for me, may very well be the final nail in the new Fantastic Four movie coffin. Over at Collider, actor Toby Kebbell gave us the bird’s eye lowdown on the character he portrays in the film, somebody called “Doctor Doom.”

“I’ll tell you this because of our history.” Kebbell confided to Collider. “He’s Victor Domashev, not Victor Von Doom in our story. And I’m sure I’ll be sent to jail for telling you that. The Doom in ours – I’m (Doom) a programmer. Very anti-social programmer. And on blogging sites I’m Doom… The low-fi way he did it, the whole ultra-real, it was just nice to be doing that, it was nice to be feeling we had come to terms with what we had been given.”

Hey, what were you given, Toby, other than characters and a concept that had been around for 53 years and raised three generations of followers in comics and on radio, television and movies?

By the way, as of this writing IMDB is wrong. They still list the character as Victor Von Doom.

So… maybe Marvel/Disney’s reaction was not so petty. Maybe it was more fanboy, and I mean that in the most positive sense of the term.

Fine. One less movie to see and, sadly, one less favored comic book to read.