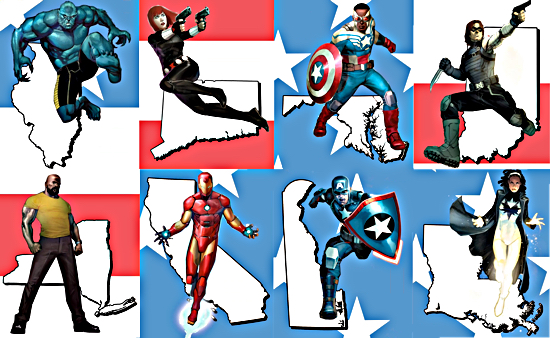 Marvel recently announced a set of variant covers for its newly launching U.S. Avengers series. As with most listicle-ized ideas in modern comic bookery, it wasn’t much of a shock to me as a stunt. It will provide local comic shops something cool to order to entice collectors with, and for the super serious collectors, there will be a future market to Pokemon Go! and just go ahead and collect ‘em all. It’s a novelty, sure, but there’s been worse ones.

What it really does, though, is cause fans to curiously align themselves to a particular hero — as jocks will take to their geographically-proximate sports-ball-teams. With that, comes that nearly indescribable urge to gain a soft-spot for a particular character… and of course then talk smack at other hero/state pairings in an effort to show one’s newfound super civic pride.

For my home-sweet-home in the south suburbs of Chicago, Illinois, comes Dr. Hank McCoy. Beast, if you’re naughty. The choice, for those in the know, isn’t too surprising. McCoy hails from the suburbs of Chicago himself (or so sayeth Wikipedia, Chicago’s Time Out edition, and countless other sources). Hence, the blue beast was chosen as the surrogate super son of Illinois.

I’ll be honest. Prior to seeing the cover and assignment, I wasn’t a fan of Beast. I don’t hate the fur ball, mind you… but even amongst various X teams and Avengers teams, he’d be nowhere close to a personal favorite. Funny enough though, seeing the cover with Hank leaping stoically off the Illinois map made me reconsider my personal feelings. Whereas California got the glitz and glamour choice of Iron Man and New York nabbed native son Luke Cage, Illinois got what I’d certainly say was a deep cut. We are home to the third largest city in the nation, and the best we muster is a guy who proclaims “Oh my stars and garters!”? In true Chicagoan spirit, my answer to that very question was a resounding “F*ck right he is!”

Beast is strong, fast, flexible, ambidextrous with four limbs, and a genius. He cured the legacy virus. He’s fluent in nine languages. He can hold up his end of the conversation with Reed Richards, Steven Strange, and Tony Stark… all while hanging upside down and teaching a class of X-babies. You see? And he’s my home state hero. It’s like we got Spider-Man and Mr. Fantastic all in one guy! And he’s the same color as our beloved Chicago Bears. Hell, he could play quarterback if he wanted!

See how quickly my opinion changed? The second they aligned my home to Hank, an affinity arose. Because he was offered as ours, suddenly there became an emotional edge to my opinion. Now when I open up my Marvel Contest of Champions mobile app, I’m more apt to hope I open up a crystal with the periwinkle protector to add to my cadre of combatants. And should people hold up their state-assigned hero as a better (“Indiana has the friggen’ Winter Solder, brah!”)? Well, I’ll be happy to scoff as I rattle off 17 ways my Dundee-native doctor can whup their candy ass twelve ways from Sunday. Curse you Marvel. What did you do to me?

It’s a cherry idea, I give them that. To turn a cash-grab novelty to in a buzzfeedesque game of proclivity is an instant hit in my book. Same way I felt when the Initiative post Civil War gave us the “Illinois Space Knights.” Same way I felt when I found out my broader home soil was home to such characters as Maria Hill, the Question (well, sort of… ask Mike Gold or Denny O’Neil), Ghost Rider, and Savage Dragon. To know that a fictional character shares the same air as you… may love a good Italian Beef — dipped, of course — and occasionally knock back an Old Style in a tallboy? Well, nothing makes me quicker to warm my icy Illinois heart.

So, it begs the question of you: What lilly-licking punk hero did your silly state get?

Mike Gold: Money For Nothing

I was having lunch with www.getthepointradio.com’s Mike Raub yesterday and we were deep in discussion about our favorite topic, what the hell is wrong with the planet and why we are the only ones smart enough to realize it. Before long we were ranting about the lameness of most mainstream comics and the various attempts the sundry marketing departments make to boost sales.

As always, this discussion came to the point where I started in on my favorite seething rage, which, in short form, goes like this: “Screw this variant cover shit; it has nothing to do with getting people excited to actually read the comic book.”

Variant covers became amazingly popular among comics retailers and a handful of wealthy consumers some 20 years ago. In fact, while packaging some books for Image Comics, I wanted to publish a variant cover printed on chewable bubble gum. Image vetoed that one; I strongly suspect they got the joke and had an understandable aversion to biting the hands that feeds them.

But as I was about to babble on and on, I came to a quick stop. A 25-watt light bulb (LED, of course) went off over my head. Indeed, I had an epiphany! It dawned on me there are at least three types of comic book covers being published today: the regular cover, the variant covers that are celebrity-drawn and/or way too cute for words, and the blank cover variant.

You’ve probably seen a few of them. Ostensibly, readers are supposed to get an artist at some convention to draw the cover for you, often in exchange for a stipend. Maybe you’ll just get autographs. Fine. Audience participation is cool. But variant covers generally go for a premium, or in exchange for purchasing X number of comics. What does this mean?

It means many comic book publishers have figured out a way to soak the reader for an “exclusive” that, in fact, costs the publisher next-to-nothing to produce.

That, my friends, is a business model.

Mind you, I may have been the first to publish a blank cover. It was DC’s Wasteland #6, and we did that because the printer screwed up massively and put the wrong cover on the issue. They reprinted it with a blank cover; my idea, as I wanted to alert the reader and the retailer that this was something different. I designed this cover, but I didn’t get paid for it for three reasons: 1) I was on staff, 2) Publisher Paul Levitz knows sarcasm when he hears it, and 3) the damn cover was blank!!!

Same thing with these contemporary blank variants. They are blank! You, the reader/collector/dealer, are spending money for nothing.

And your chicks for free.

To paraphrase Yakov Smirnoff, Comics – what a business!

Someday, somebody will try to sell a comic book based upon its merits and not rely on stunt marketing to do the heavy lifting.

If the business lives that long.