Tagged: The War Between Men and Women

Trots and Bonnie by Shary Flenniken 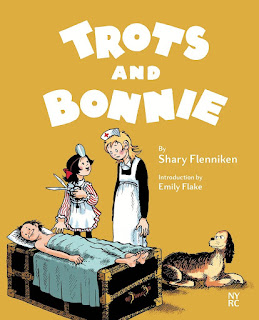 , the past is moments. We slot in memories to specific points in time: that was when I was living there, remember when Y was five years old and started doing Z?, that was the Christmas when A had that crazy hat.

But time is more fluid than that. Anything we remember was more than a moment: it was a period, an era, an epoch. It’s true for our own lives, and it’s true for a lot of art.

Especially comics, which are the great serialized art form of the American 20th century. I might rhapsodize about Saga of the Swamp Thing #21, the famous Alan Moore “Anatomy Lesson” story that upended that series and gave corporate comics a new template to exploit for the next few decades, and peg it to February 1984. But Moore started writing Swamp Thing one issue before, and “Anatomy Lesson” is full of the loose ends of the previous stretch of stories – and the reason we look back at it in the first place is what came afterward. It lived up to its promise, so we remember it.

Shary Flenniken lived up to her promise in Trots and Bonnie . More than that, she made radically different, larger, stronger promises than almost anyone else in comics: some other women were aiming in the same direction, but Flenniken’s work was purer, more precise, and consistent over a much longer period.

That’s the memory-moment issue again. I think of Trots and Bonnie in the context of the height of National Lampoon in the 1970s, as a burst of feminist energy in the middle of that very sophomoric, boyish humor. But Flenniken produced Trots and Bonnie strips for more than twenty years, from 1972 to 1993, spanning not just the Lampoon height of the ’70s but its declining years in the ’80s and its eventual implosion. Flenniken was one of the most consistent things about Lampoon for those years: a page of female concerns and anger in the middle of some of the most male-oriented humor imaginable, a context that got steadily blander and more derivative as those ’80s wore on.

That’s the wonder of it: that Trots and Bonnie existed at all, that it lasted almost the entire life of the Lampoon. Some editor at the Lampoon (OK: it was Michel Choquette) saw Flenniken’s early work – the first four Trots and Bonnie strips collected here predate her Lampoon years, and she did some other work as well – and said “my audience of college-aged sex-obsessed boys needs a comic strip about a thirteen-year-old girl obsessed with sex in very different ways.” He was right. And his successors, who kept the strip running, were just as right.

This book is the first time the Trots and Bonnie strips have been collected together in English; there was a previous collection only published in France, for whatever reason. It is not complete: for all that some of these strips are shocking and norm-breaking – the Lampoon prided itself on breaking norms; Flenniken chose different, more central norms than most of its contributors – there are some unspecified number that are too much to be republished. Flenniken says they were omitted because “Oh, that might hurt somebody’s feelings or something.”

I suspect it’s a bit deeper than that. But that’s how Flenniken works. That heavily-socialized voice of mid-century womanhood comes easily to her, even if the reader isn’t sure if she’s using it to tell the truth, to mask her intentions, or to set up her next attack on its sexist assumptions and crippling control of women.

But know that, no matter how shocking some of the strips here are, there are some Flenniken left out. She’s thinking about your poor shocked sensibilities, oh eighteen-to-twenty-four-year-old boys, the same way she was for the twenty years she made these comics. She’s thinking about those sensibilities, but maybe mostly about how to pop them most effectively and quickly.

Bonnie is a thirteen-year-old girl. She reads a bit tomboyish on the page: Annie-style blank eyes, always wearing pants, usually in a dark pullover sweater over a white shirt, like a school uniform. But she’s obsessed with sex, because she is thirteen. The great secret of Trots and Bonnie, for even the dull boyish readers who didn’t get any further into it, was that girls (and, if they realized it, by extension women) were as interested in and fascinated by and eager to learn about sex as boys were.

Of course “as” covers a wide range in both populations: that’s the point. But Flenniken, in the sex-obsessed Lampoon, gave those boys a window into the ways girls could be sex-obsessed, the ways they might talk about boys, might have their own concerns and worries and demands. Girls in most of the rest of the pages of Lampoon were objects – pretty naked bodies to adorn a joke in Foto Funnies, the targets of lust in most of the written pieces – but in Trots and Bonnie they were central, and active, and in control.

Trots is Bonnie’s dog: in best classic-comics fashion, he can talk, at last some of the time. He gets the punch lines a lot of the time, because that’s the deal with talking animals: they don’t have the hang-ups and fears and interpersonal problems of humans. They can just do; they don’t have to be self-conscious about it.

Flenniken wraps those three characters, a few others that recur at least a few times (perpetually smiling boy-next-door Elrod, Bonnie’s clueless and complaining parents), and a whole lot of one-offs into a series of stories, most usually single-pagers, that are all about sex. Sometimes it’s sex as in the old in-out (or the desire for same, more specifically), sometimes sex as an advertising campaign, sometimes sex as in women. There are strips about menstruation, abortion, and rape: Flenniken is not here to be happy and nice for your entertainment.

In retrospect, the Lampoon was a great home for this work. It was an outlet obsessed with pushing boundaries. Flenniken was pushing in an entirely different direction – I’d argue a better, more important direction – but just that she pushed so hard must have appealed to the Lampoon editors.

Trots and Bonnie is not dated. Not in the slightest. The details of the lives Bonnie and Pepsi lived in these stories are of their times, but their mental lives are still current. (Sadly, I guess. We should have gotten beyond this by now.) Even the classic early-20h-century style art just makes it seem more eternal and current.

I still think boys need to read Trots and Bonnie more than girls do – and I use the diminutive forms of both deliberately – because girls already know all of this. (Maybe not consciously, all of them: we all know different things. But I expect it’s already in their heads, one way or another.) So I’m very glad to see that it’s available again, and I hope the thrill of sex will induce some of the right readers, the boys who most need to learn that girls are people, to read it, and to laugh, and to achieve enlightenment.