Sometimes a banana is just a banana.

It was all over the news. Well, all over Fox News, anyway. Captain America was targeting conservatives.

What happened – as best I can fathom, as even Quentin Tarantino would have had a difficult time following the nonlinear storytelling in Captain America: Sam Wilson #1 – is this. Some weeks back, super villain the Iron Nail neutralized the Super-Soldier Serum in body of Steve Rogers, the original Captain America. Without its effects, Steve Rogers, who was born in 1920, found his body rapidly aging to that of a 94-year-old man. (Question: did the story explain why Steve’s body rapidly aged to 94? Sure Steve was born on July 4, 1920, or 94 years ago, when he lost the Serum. But he spent all the time from early 1945 until The Avengers #4 in suspended animation. Marvel says Fantastic Four #1 didn’t happen in 1961, it happened 10 years ago. That’s Marvel Time. So in Marvel Time, The Avengers# 4 happened a little bit less than 10 years ago. Meaning from 1945 until a little less than 10 years ago, Cap’s body was in suspended animation and didn’t age. Cap went into the iceberg as 24-year-old and came out still 24 years old. Since then, 10 years have passed, Marvel time. So it doesn’t matter what year Cap was born, physiologically he should have the body of a 34-year-old man, not a 94-year-old man. How, then, did Cap’s body age to an age it had never been? Inquiring minds want to know. And even if they don’t I do.)

Because Steve couldn’t meet the physical demands of being Captain America any more, he turned his mantle and shield over to his partner Sam Wilson, formerly the Falcon and now Captain America. Sam promptly got a bunch of people mad at him by taking public stands on several partisan issues. What stands and what issues the comic never told us, but I think we can safely assume it wasn’t whether the President should be pardoning Thanksgiving turkeys. 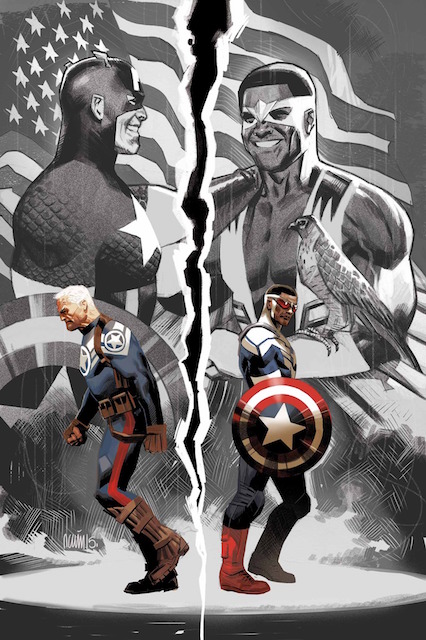 Things got worse for Sam, as his actions caused a strain in his relationship with the super spy organization S.H.I.E.L.D. Suddenly Sam was on his own and without resources. So he set up a national hotline that people could use to tell him about injustices or wrongs that needed to be righted.

One of those hot line calls was from Mariana Torres. Her grandson Joaquin left water, medicine, and food out for people who were walking through the desert to cross the border from Mexico into America. Mariana also told Sam that Joaquin didn’t come back from his last mission. She claimed that he had been kidnapped by the Sons of the Serpent, who were patrolling the border to stop the undocumented from entering. (It should be noted that the Sons of the Serpent is a long-time white-supremacist and racist hate group in the Marvel Universe; basically Marvel’s version of the KKK.)

Sam-tain America promptly went down to Sonoita, Arizona and confronted the Sons of the Serpent, who were about to capture some border crossers. And that’s where we came in.

Came in with Fox News criticizing the new Captain America and his comic for vilifying, “an American who has misgivings about unlimited illegal immigration and the costs associated with it,” Fox’s commentators said that writers should “keep politics out of comic books” or should be telling positive stories about, “the people who are working the border to keep us safe.” Fox News went on to say that the Sons of the Serpent are only stopping people from coming over the border illegally and Captain America wanted to keep them from doing that.

Now I admit the people who were entering the country were doing so illegally and Joaquin was breaking the law by helping them. If all that was happening was that the Sons of the Serpent were apprehending people who were entering the country illegally then turning them over to the Border Patrol and Captain America wanted to prevent them from doing that, Fox would have had a legitimate story. Problem is that Fox’s interpretation of the comic was simplistic.

See what Fox News conveniently forgot to do was tell its viewers the real reason the Sons of the Serpent were apprehending border crossers. The Serpents weren’t patrolling the borders and turning undocumented aliens over to the Border Patrol. They were grabbing people and selling them for $5,000 a head to Dr. Karlin Malus, an evil scientist,  so that he could use them in his genetic experimentation. The Sons of the Serpents were kidnapping people.

For all the furor Fox fomented, turns out that Captain America wasn’t targeting conservatives. He was going after kidnappers. You know, criminals. And that’s what Captain America is supposed to do, isn’t it? Go after lawbreakers. Because, you know, bananas are bananas and not cumquats.

Might have been nice if that explicit kidnapping information had been in issue 1 so that even a simplistic reading of the comic would have shown Captain America was going after kidnappers not conservatives. Maybe then Fox News would have done a fair and balanced story.

Or not. After all, bananas are still bananas.