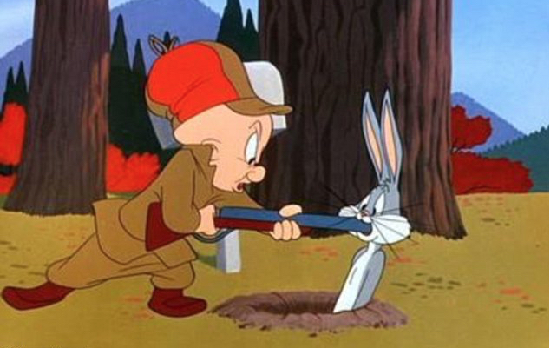 Not more violence, just choreographed fights, fake blood, and the massive destruction of props. I like to watch stuff get blowed up real good. Imagining the destruction of my enemies, or even just the assholes who wear backpacks in crowded subways, makes me feel better.

All without hurting anyone.

In decades past, there were arguments that excessive exposure to violent media dulled the audience, making them indifferent to the pain caused by real-life violence. It’s entirely likely that those who are mentally ill would have such an unhealthy reaction. I mean, mentally ill people can have unhealthy reactions to The Very Hungry Caterpillar.

Adults, however, who are not mentally ill can use entertainment to engage their emotions in imaginary battles to the death against those who must upset us. Even the Bible will work, especially if you enjoy a deity who drowns everybody (including animals) for no good reason.

I think we should find a way for more people to enjoy imaginary violence, instead of the real thing. There is far too much of that in present-day America. If I might quote: “More than once a day on average this year, mass shootings have destroyed lives and families. President Obama on Saturday said this endless ritual of murder is “not normal,” but that is precisely the problem: In America, it has become all too normal.”

Wouldn’t it be great if the new normal was to simply go to the mall and see a movie? Isn’t that better than all of us getting a gun?

Now, if you’ll excuse me, reading quotes from the GOP presidential candidates defending the Colorado terrorist is making me need to read Bitch Planet.

Shock. Outrage. Fear. These were my immediate reactions to the terrorist attack on the offices of the French satiric magazine, Charlie Hebdo, last Wednesday. This one strikes close to home, despite being in France. The main targets – and victims – were an editor and several artists at Charlie Hebdo and the reason given were Muslim outrage at caricatures of the prophet Mohammed, a big no-no in Islam. The magazine, the artists, were exercising their freedom of expression, their opinion, and it supposedly offended some radical Muslims.

There is a purpose to terrorism over and above the act itself, over and above the shock and horror of the violence. The site Terrorism Research says “Terrorism is designed to produce an overreaction and anecdotally, it succeeds at that almost all the time.” The ultimate target of the terrorists are not the initial victims but the general public.

Think back to 9/11 and the World Trade Center. Think of the time when the first plane struck. The second tower was hit slightly later – time enough for the news cameras to be there and capture it. Remember how the images of video played and re-played.

There are videos connected with the attack on the offices of Charlie Hedbo and they are being re-played as well. I know when I see them, when I think about the attacks, I am enraged and part of me wants violent terrible revenge. That is not the better angel of my nature and I know that.

As a writer, I put my protagonists through hell because that process strips away the layers and reveals who they really are. My tenet is that if something is true in writing, it is because it is true in life. We may think we know how we would react in a given situation but, until that moment actually arrives, we don’t really know.

As a people, as a civilization, we are in that situation now. As I write this, the French police report that terrorist sleeper cells in France have been activated over the last 24 hours. CNN reported that a senior U.S. law enforcement official said “This isn’t going to end.” Nor do I think it will be confined to France; I think inevitable that the attacks will come to our shores as well. After all, we are “the Great Satan.” How will we respond? In the past, we have responded with Abu Graib, the war in Iraq, the cells at Guantanamo. Is that who we are? Is that what we must become to survive?

I am a pop culture writer and I tend to have violent protagonists. They don’t turn the other check and often seek revenge. I could be accused of promoting that viewpoint with my work; I like to think I’m allowing people to vent that anger through fantasy rather than advocating the approach but perhaps I’m just being self-serving. I also know, however, that all the characters that I write are damaged and scarred by their approach and I hope that I write them that way.

It will come down to this – how much are we willing to sacrifice to feel safe; how much are we willing to endure to be free? We might think about Lincoln’s Second Inaugural Address with which Steven Spielberg chose to close his remarkable film, Lincoln: “With malice toward none, with charity for all, with firmness in the right as God gives us to see the right, let us strive. . .to do all which may achieve and cherish a just and lasting peace among ourselves and with all nations.”

If we cannot, then the terrorists will have in fact won.