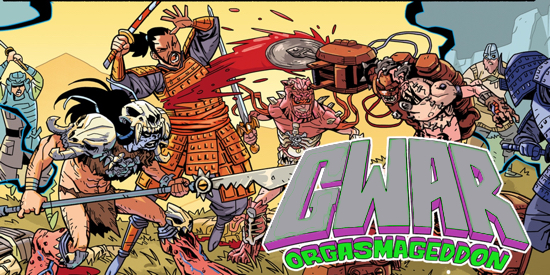 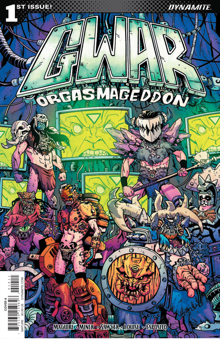 Back in October, an inarguably simpler time, I got the chance to interview writer Matt Miner and editor Brendan Wright on the project they were promoting on Kickstarter, Gwar: Orgasmageddon. Since then, not only did that Kickstarter get fully funded, but it got picked up for distribution by Dynamite Entertainment. The first issue is scheduled for release next month. I got my hands on a review copy, and since I asked you all to support the Kickstarter for this comic I might as well tell you what I think.

Before I jump in there are a lot of credits to this comic, so let me get through that first. The main 18-page story is written by Gwar’s own Matt Maguire and Matt Miner, line art by Jonathan Brandon Sawyer with Matt Maguire, colors by Marissa Louise and Doug Garbark, and letters and designs by Taylor Esposito. The four-page backup, X-Cops/Zipper Pig, was written and drawn by Gwar’s own Bob Gorman with colors by Hank Jones. The two-page backup, Gwar Slave Follies “Pissing Match,” was written by Matt Miner, line art by Scott Wygmans, colors John Bailey and letters by Taylor Esposito. Interior cover by Megan Muir. Covers by Jonathan Brandon Sawyer with Josh Jensen and Scott Wygmans. Edited by Brendan Wright.

Now that I got through that, it’s time to talk about my thoughts on Gwar: Orgasmageddon! Gwar, as you may know, is a band with a lot of theatrics. It’s kind of like if KISS (which is also a comic book at Dynamite) was a Troma production. They’re a group of unapologetically violent and somewhat homoerotic aliens that fight against other unapologetically violent and somewhat homoerotic aliens, except their manager is not an alien. They also travel through time, so throw some Bill & Ted into my analogy earlier. Maybe some Conan too.

Anyway, the story starts out by introducing most of the characters with caption boxes on the first page like a Legion of Super-Heroes comic. Both Matts weave a story with breakneck speed as we start right in the middle of a Gwar show and goes right into murder and mayhem, and that’s before the bad guys get there! Once they do, we’re propelled into a time jumping murder spree in an overtly phallic rocket that’s called exactly what you think it should be called. Hilarity ensues as the bodies pile up.

Jonathan and Matt’s line art is absolutely wonderful. The pages are laid out primarily in four or five panels with most of it being very traditional looking. This makes for a good contrast to the absurdity throughout the story and reinforces some of the parody elements we see in the issue. Their expressive facial expressions really sell the tongue-in-cheek dialogue and the fourth wall breaks that occur sporadically throughout. It sometimes feels like I’m reading an X-treme Marvel type comic from the early 90s.

The best part about this story might be the coloring. The colors throughout this, heavy on greens, blues, and reds, really make this story pop. Honestly, the colors in this story make it feel so fluid that after you put this comic down for a minute you’ll swear that you remember watching a Gwar cartoon. Taylor Esposito’s lettering also sells how Gwar and the other characters talk in such a way that even if you haven’t heard of the band, you’d know their voice.

The shorts at the end are fun too, and really give it a throwback feel. X-Cop/Zipper Pig has a more simple art style and is done as an origin story. “Pissing Match” is a quick two-pager that helps flesh out a couple of characters you already saw in the bigger story, again like something out of a Legion of Super-Heroes comic.

I will say that if you are easily offended, this book is not for you. I don’t mean to say that as a slight to people who would be easily offended; it’s perfectly within your right. I’m just saying you probably won’t like this. The blood gets bloody, the gore gets gory, there may be a joke or two that comes off as culturally insensitive as well as some events that Gwar experiences in the past that they influence in a way that may upset you.

All in all, Gwar: Orgasmaggedon #1 is a fantastic debut filled with the kind of fun you miss in comics. It’s a wild ride that never tells you it’s sorry but does remind you to not take it too seriously. Everyone that wants to do a comic about a band needs to read this and take notes. And whether you read this because you’re a Gwar fan or just because it’s a fun time, you won’t be disappointed.