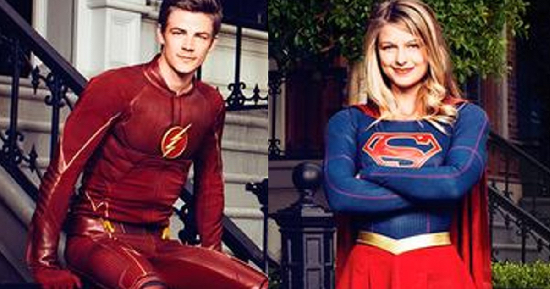 What is wrong with you people? Yesterday, I heard that CBS might not renew Supergirl for a second year, which generally happens to a television show because not many people are watching it and so I ask again, what is wrong with you? It’s not like you’ve got anything better to do with your Monday evenings! I could tell you that as this is being typed, in a few hours, Supergirl will deliver to your screens a first. (Well, actually a second, but we’ll get to that.) But you won’t read this until four days from now – unless you’re too busy to read it! – and by then what I’m about to reveal will be history. The way you young people reckon time, ancient history.

Well, fudge. I’ll reveal it anyway. The current episode of CBS’s Maid of Might entertainment will feature a crossover! The Flash, hero of another show, will visit Supergirl and… they’ll do some pretty darn interesting stuff, I bet. Probably catch a villain or two, maybe more. Now, of course, such events aren’t exactly boggling in tv these days. Just recently, the cops of Law and Order SVU, set in Manhattan, visited the

Chicago cops and… caught a bad guy. Both SVU and Chicago PD have the same producer, Dick Wolf, and appear on the same network, NBC, so although the crossover was a big deal it wasn’t that big a deal. And it had happened before and may happen again.

But The Flash and Supergirl? Here’s what makes this a socks-knocker: the shows appear on different networks! Those of you who read comics – there are still some people who read, aren’t there? – may be aware that comics publishing’s two Giant Gorillas, Marvel and DC, have been staging print intercompany crossovers beginning, I think, with Superman vs Spider-Man in 1976. There have been others since – I’m not sure how many, but some. That’s print, an ancient technology of which you may have heard. But television? Count the palling up of Supergirl and the Flash as revolutionary.

Or maybe not. Way back, characters from two lawyer shows, The Practice, broadcast on ABC, and Fox’s Ally McBeal, met on each other’s turf. Both programs were created by David E. Kelley, so maybe the stunt wasn’t earth-shaking, but it was unprecedented. And it set a precedent which I, at least, will witness at eight tonight. You? Well, you don’t seem much interested in watching Supergirl. You certainly don’t watch it enough to keep it on the air. Is what’s on C-SPAN really all that enthralling?