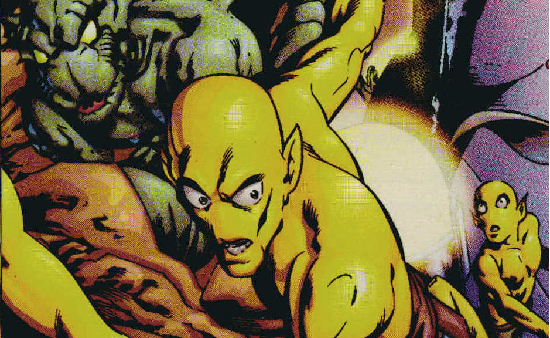 Nope. This is not an old guy rant about how you-all young’uns are ignoring comic books because you’re too busy enjoying the movies and teevee shows being made out of those same comic books. I’m beginning to think that if you lust for heroic fantasy, maybe the plethora of such fare in our theaters and our sundry home electronics will serve your needs.

Back when I was doing public relations for DC Comics, which was so long ago it was well before my pal Martha Thomases was doing public relations for DC Comics, I was fond of telling the press that we had it all over movies because we weren’t restricted by reasonable special effects budgets. We only were restricted by the imaginations of our writers and artists, and that posed no problem at all. We had, and we continue to have, lots of people with wonderful ideas along with the ability to get those visions inside the reader’s brainpan. We could blow up a planet on page one, resurrect that planet on page two, populate it on page three and then blow up the new place on page four.

Today… well… we’ve got computers and brilliant people who never see the light of day to put all that in a movie at a reasonable price and at reasonable speed. And then a bunch of other moloids add music and sound effects and maybe some 3-D crap. Movies – and, now, television – can boldly go where comic books always have been… and get there first.

Better still, the consumer’s cost per minute is far lower in these new venues. Movies and cable bills are expensive, but two hours worth of comic books can run you maybe forty bucks.

This is not to suggest I no longer enjoy comics. To paraphrase a famous ape-fighting gun nut, they’ll have to rip that comic book out of my cold dead hands. And I hope it’s a goddamned expensive one. But this does offer me the opportunity for praise my fellow American publishers that are not owned by mammoth movie studios for moving well beyond traditional superhero fare. Today we can tell virtually any type of story, even true ones, and if that story is well-told and well-marketed we’ve got a pretty good shot at not losing the rent on it.

Maybe we haven’t quite reached the level of selling comics to, say, bored grandmothers who pine for their days of child-rearing. There are very specific comics in other countries, particularly Japan and Belgium, that cater to audiences we rarely think of in the American quadrasphere. But we’re almost there.

I see coming up with superhero comics that are more involving than other superhero media as a challenge to our comics creators. Having worked with at least four generations of such talent, I know this will be a wonderful thing to behold. However, right now I’m in the middle of producing at least a half-dozen original graphic novels (editors get to multitask, which is another word for “short attention span”). Some sort of fall into the category of heroic fantasy, maybe, but most do not.

As far as I’m concerned, happy days are here again.