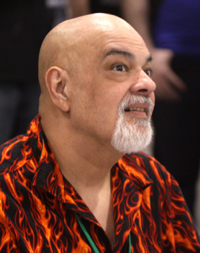 None of us know what made us what we are, and when we have to say something, we make up a good story • Steven Pinker

Long drive to and from Secaucus. It was a convention-filled weekend and, judging by the contents of the jar that accepts donations, a profitable one for The Hero Initiative. That organization is mostly the reason I attend conventions these days and a noble reason it is.

Two rough spots: as I was leaving a stage after blathering for an hour, I stumbled and fell – whomp! No harm done – no kidding, none – except maybe to my ego.

That slapstick was the first rough spot. The second was much grimmer. Sometime Sunday afternoon someone said that George Pérez wasn’t in attendance because he’d been taken to the hospital. Later we learned that George had suffered a heart attack. Had been given angioplasty and was resting comfortably. Heart attacks are never a laughing matter, but some are worse than others and, apparently, George’s was not as serious as it might have been. Don’t uncross your fingers yet but there’s reason for optimism. 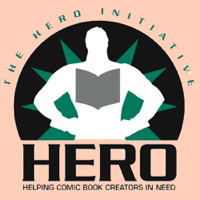 Little (medical) digression: The “angioplasty” that George underwent involves an empty balloon being threaded through a blood vessel in the groin area up into a blocked artery and inflated. This crushes the obstruction against the artery wall and opens the passage. A live X-ray machine lets the surgical team see exactly what’s happening in the patient’s body, and when I had my angioplasty some 46 years ago, give or take, the X-ray screen was positioned where I could see it. So, lightly sedated, I lay there and watched my heart beat. Pretty cool, actually. 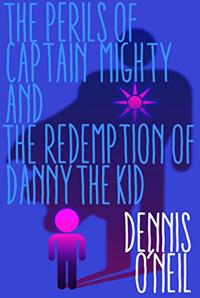 I’m not a diary-keepin’ kind of dude, but sometimes I wish I were. Last week, I mentioned (and please visualize me blushing here) that I’d published a book and, apart from not knowing how to promote it – apparently hype spinning is part of the job – I thought my book-related problems were over. Ha.

What you have to understand is that it took about six years to get this thing to the printer and not much of that time was spent writing. So whence the stretched chronology? There were a lot of snafus, all kinds of snafus and I can’t remember what they were. I just know that they weren’t related – they weren’t the same kinds of snafus that are often unintentionally caused by people who aren’t acquainted. This would be a much better story if I could be precise, if I could tell tales and allow you to share my frustration. But I don’t recall particulars. And I don’t have any kind of written record. So zilch.

A written record of what? Why, sir, of the composition of a novel someone has titled The Perils of Captain Mighty and the Redemption of Danny the Kid.