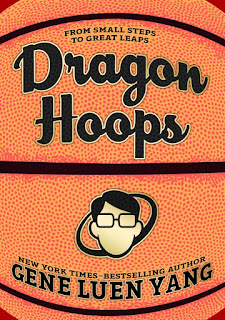 I’m no more the obvious audience for this book than Gene Luen Yang was the obvious creator for it: neither of us cared all that much about basketball. The difference, I guess, is that Yang got interested in sports because of his community and a specific story at a specific time, and then created this graphic novel to tell that story and his involvement in it. [1]

Yang was a math teacher at Bishop O’Dowd, a respected private Catholic high school in Oakland, California. The men’s varsity basketball team there, the Dragons, had a strong program: they’d been among the best in the state (and California is a big, competitive state) on and off for a couple of decades. But they’d never won the state championship — coming into the 2015 season, there were 0-8 in that big game.

Yang was coming off his previous graphic-novel project, 2013’s double-barreled Boxers & Saints , and was still semi-aimlessly casting around for his next big personal comics project a year later. Of course, at the same time he was also negotiating to do more writing of other people’s properties, which Yang puts into this story as a secondary plot or background flavor. [2]

So my guess is that this was a more general period of “what do I want to do with the rest of my life.” Yang shows himself with four young children, and dividing his time in three: comics, teaching, and family. Turning comics into a day-job allowed him to simplify that down to just two divisions, which has to be appealing. His soul-searching over the Superman job is connected in this book to his being a teacher at the school: this is a book about the school and its basketball team, with Yang as the viewpoint character, rather than a story essentially about Yang’s career and life, with the school as a main setting.

But that’s what was behind it all. Yang wanted new projects, was probably already thinking on some level about needing to quit teaching to focus on comics fully, and wondered what the big deal was about the Bishop O’Dowd Dragons. So he went to talk to a fellow teacher, head coach Lou Richie.

And out of that conversation, and the events of the next year, he made Dragon Hoops , the story of primarily the 2015 team and secondarily about Yang learning about the history of the Dragons, about the players on the team in 2015, and about Richie. And then, tertiarily, about Yang himself and his career decisions — those are the least connected to the team, so Yang keeps them appropriately less important. (There’s also a minor thread about how Yang tells the story: there’s one loose, unfinished thread of this story that he didn’t want to include — but the fact that he mentions possibly not including it tells we sneaky readers that he already has included it.)

Again, Yang is the viewpoint character, and our lens into this world: this is a sports book largely for an audience that doesn’t deeply care about sports a lot of the time. But it’s not his story, and he’s not trying to make it his story. It’s the story of Richie and his players: superstars Ivan Rabb and Paris Austin, younger players like Arinze Chidom and Jeevin Sandhu, and a half-dozen others. It’s a book organized by the rhythms of a season: preparing ahead of time, early practices, the games of the season in order, and then (of course) the post-season, culminating in that big championship game again.

Yang was lucky in his story: teams fizzle out everywhere, every year. The Dragons could easily have ended up out of contention. It’s the danger of starting to write about a story before the ending is clear — Yang was something like a reporter telling this story, building blocks of how he wanted it to go while never being sure it would end the “right” way.

I won’t tell you what the ending was, or even the middle: the Dragons played a lot of games that year. And the women’s team, also called the Dragons, had some games that come in here. The story of whether or not the Dragons won is important, but more important (to Yang, at least, if not to many of the readers) is who these players were, how they worked, what they accomplished together, and how they came from different backgrounds to be part of something larger while still staying specific people.

Yang has always been interested in representation — most obviously with Chinese-Americans like himself — and Dragon Hoops is a book where he broadens that view to look more deeply at other ethnic groups in America. Most obviously, since this is about basketball and Oakland, Black Americans are central to Dragon Hoops. It was published in March of 2020, and so finished months before that — the specifics of the American racial-justice landscape have shifted hugely since that point, though not in any way that damages Yang’s story and understanding here. He is on the side of hyphenated Americans and ethnic Americans of all kinds, wanting them to have secure, real places in the world that are not reliant on the good will of white people.

Dragon Hoops never says the words “white supremacy.” But Yang writes about it nevertheless: from his own point of view, and from the lives of the Black young men who make up most of the Dragons. There are several scenes of bigotry here, directed at the Dragons — mostly trash-talking audiences at road games — and Yang picks up the way hate grabs onto anything to demean and attack, that there will always be something that those bigots use, no matter who they’re yelling at this time.

Because this is a real story. And a real story about a real basketball team of mostly Black teenagers in 2015 America is going to include some racial slurs. Maybe there will be a year when that won’t be the case. Yang hopes so. I hope so. The Dragons players hope so. But we’ll have to see.

[1] I frankly still don’t care that much about basketball: even when I did care about sports, it was the one I never got into. But I liked the book, he said brightly!

[2] Everybody’s got to eat, and everyone wants to do work that personally excites and speaks to them. So, if what Yang really wants to do with his life is write a bunch of stories about Superman punching things better, that’s great. I generally have very little interest in punching-things-better stories, though, so those background negotiations can feel to me, and readers like me, like he’s getting pulled into a sadder, lesser world after making personal stories and teaching for a living.