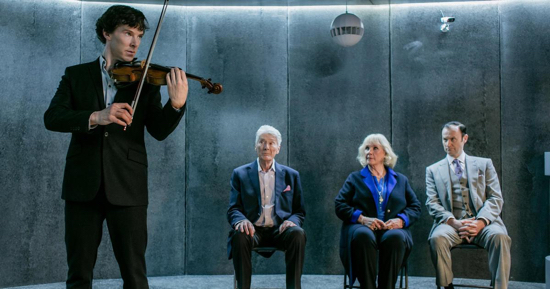 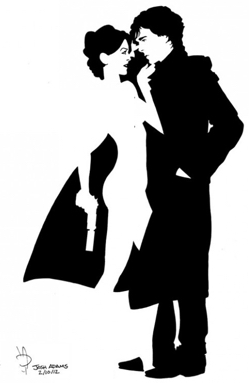 So there’s this ancient Greek named Theseus who builds a ship. Over time the ship needs repairs and pieces of it have to be replaced and finally everything has been replaced. Not a single splinter of the original craft remains. Which brings us to what is known in some circles as Theseus’s Paradox. We ask: Is the ship our man Theseus ends with the same one that he built years earlier? Please remember that nothing of the original remains.

Want to push this a bit further before we introduce comics characters into the discourse? Okay, I’m a ratty rival of Theseus and I take every piece of what Theseus has built and use it to build my own ship. I add nothing, I simply reuse Theseus’s materials. And now the question becomes: Whose ship is this anyway, mine or Theseus’s? (Never mind that Theseus might be a big, tough Greek able to beat me silly and take the damn ship and not bother with philosophical niceties.)

Marifran and I spent a chunk of the weekend catching up on episodes of Sherlock, the BBC’s excellent reworking of Arthur Conan Doyle’s classic Sherlock Holmes stories. In the earliest teleplays the title character is Doyle’s cold, eccentric thinking machine who has no real friends. He describes himself as a “high-functioning sociopath” and, yep, that just about says it.

Gradually, the plot emphasis shifts from Sherlock’s dazzling detective work to Sherlock himself and his private torments. The later stories are about him and not about the puzzles he solves. (Do some of you think I have completely changed the subject? Please – a little faith?) In the final chapter, he has come to admit a deep affection for his companion. Dr. John Watson, has apparently overcome his demons and seems to be a rather pleasant chap. (Full disclosure: a similar transformation occurs in Doyle’s work.)

There have been hundreds – thousands? – of interpretations of Doyle’s creation, including a teevee program, Elementary, the premise of which is virtually identical to that of Sherlock. Are any of them – the television shows, the movies, comics, novels, plays – any of these the real Sherlock? Or only those written by Doyle?

The venerated Steve Ditko created a comics character called The Question that ran as a backup feature in Charlton’s Blue Beetle title, vanished, and returned in his own DC comic that I wrote. Wrote, and completely changed the hero’s personality. It ran for several years – a lot more Question than Steve’s version. So who’s got the real Question, Steve Ditko or me?

Superman, Batman, Swamp Thing, our newly beloved Wonder Woman, Spider-Man, the Fantastic Four, the ones I’m forgetting – all underwent changes, sometimes pretty quick changes, and each version has its partisans.

And should we care?

(By the way, I regret any unhappiness I caused Steve by my rejigging his stuff. I don’t think he could have approved of what I did to it. Sorry. And is it good form to end a column with a parenthesis? Well, what kind of question is that?)

With only a couple weeks until Christmas, we Tweeks can’t stop thinking about what we’ll be getting (because duh…we’ve been totally good this year). But it’s also come to our attention that we’re not easy to give gifts to.  Anya prefers digital comics and Maddy can’t watch DVDs on her laptop, but you can’t unwrap a something that doesn’t physically exist.  So this where we talk about why today’s tweens are hard to shop for, ponder if buying fandom merch should be a personal purchase, and give some ideas on how to present the kids in your life with presents they will love.  We also have a companion Pinterest board with recommendations (& a peek at our wish list) if you haven’t done your shopping yet!