First up: next month’s Un-Men, the old Swamp Thing foes and stars of the American Freaks mini-series. The monthly book, written by John Whalen and pencils by Mike Hawthorne, revolves around how the Un-Men are now running a tourist attraction at the nuclear test site reservation that was established at the end of the 1994 mini-series.

Bill Willingham and Matthew Sturges will be bringing a monthly House of Mystery revival. It will not be a traditional anthology, but will have ongoing story arcs and one-shot stories within. The series kicks off with Cain arriving home from a visit to Abel and finding the house has been stolen and turned into a pub where patrons have to tell the story to pay their tab, a gambit reminiscent of the Sandman story that featured Cain and Abel. We’ll take this chance to again say the “place has been turned into a bar and tell a story” format sounds awfully familiar, particularly to GrimJack fans.

Out this spring will be a monthly Madame Xanadu title penned by Matt Wagner with art by Amy Hadly. The series will explore her relationship with The Phantom Stranger, revealing why it is they dislike each other so much and how she got the name “Xanadu.”

In October, UK teevee writer Si Spencer (Torchwood) offers up a slice of British sub-culture in the crime-noir Vinyl Underground about a group of four occult detectives in London.

In November Vertigo celebrates the 20th anniversary of the monthly Hellblazer title with Hellblazer: Pandemonium graphic novel. (The cover date of Hellblazer #1 was January 1988) Jamie Delano’s story takes John to Iraq and is a commentary on the current political situation.

November will also see the release of the graphic novel Cairo. A story structured like 1001 Arabian Nights about a genie trapped in a hookah features various occult characters form the Vertigo universe which will all be pulled into one story. Also out: Absolute Sandman Volume Two, which will feature lots of behind the scenes material.

END_OF_DOCUMENT_TOKEN_TO_BE_REPLACED

Tom The Bomb has some interesting ideas on what should have been in Spider-Man 3, along with many of the problems in the film:

What are some of your ideas? Feel free to discuss in comments. And it’s been a month, so it’s a spoiler-friendly zone. You’ve been warned.

by Lillian Baker and Martha Thomases

We went to see Spider-Man 3 on Sunday afternoon in the East Village. Even though it was dinner-time, the movie theater was full. “We” are Lillian Baker, age 8, and Martha Thomases, age 54. Here’s what we thought. Beware of spoilers.

MT: I enjoyed myself in the theater, although there were some draggy parts. To me, the best part of the Spider-Man films is the way New Yorkers claim Spider-Man as one of their own. He’s a home-town boy.

LB: At the end, you find out that Venom doesn’t like sounds.

LB: I guess that’s because he was wearing a costume. The other guy didn’t have a mask on to cover his teeth.

MT: The friendship between Peter and Mary Jane and Harry was wonderful. I thought it felt like a lot of relationships that last through different parts of your life. I was glad Harry redeemed himself.

MT: It seems to me that New York City isn’t a good place for a creature that doesn’t like loud noises.

LB: I agree with that. The girl was screaming and that was a loud noise. I just don’t get it.

END_OF_DOCUMENT_TOKEN_TO_BE_REPLACED 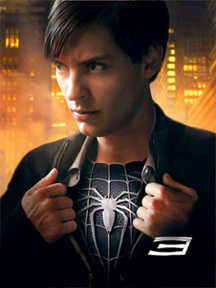 END_OF_DOCUMENT_TOKEN_TO_BE_REPLACED

The phone rang. It was a dame. A brunette who’d make a swear off X-books and swear he only read Sandman. She spoke in a voice like syrup. "Do you want to be spoiled? Fair warning."

"You always spoil me, doll."

"What are you talking about?"

"A late night shooting. After this, the Sopranos would be done with. Finished. Hasta la bye-bye."

"Where is this going down?"

Yeah, I knew Holsten’s. A mom and pop ice cream parlor, the kind they don’t make any more, the kind where they still sell jellied candies behind glass counters and you can still get an decent egg cream with your patty melt.

She told me to get there if I had any hope of seeing the thing go down. I hung up the phone and left.

When I got there, I knew it was bad. A crowd had already formed — they’d heard shooting and came out to watch the gory mess. People are the same all over.