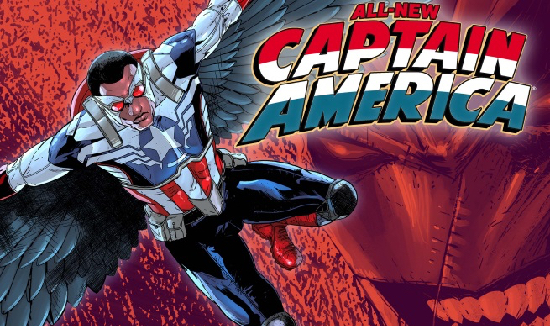 Marc leans back on his heels as the audience hoops and hollers. His co-band leaders John Linnell and John Flansburgh wrap up their intro song, a peppy reprise of “Ana Ng.” The auditorium simmers down a tad as the music fades.

So… uhh… have you heard the news lately? Have you seen this? Seems that Fox News was amazed that Captain America wasn’t as pro-conservative as they’d thought. Have you heard about this? Yeah! It seems they missed the whole Civil War too!

The band hits a quick rim-shot and sting of “Doctor Worm.”

Ehh, don’t blame me if you didn’t laugh. My writers stink. And to totally honest, when I read this story I didn’t laugh either. Not only because it wasn’t surprising that Fox News blew something out of proportion without vetting their sources, but because I’ve never found that channel to be funny at all. It’s the same reason I stopped laughing at Donald Trump’s campaign speeches.

So, what’s with all the rage? Sam Wilson – the current Captain America – is a black, liberally-minded super-hero. Amusingly, Steve Rogers – the currently elderly former Captain America – is a white liberally-minded super-hero. I admit that I’m not privy to the recent issues of Marvel’s most patriotic pugilist, but I know enough about the characters themselves to understand why Fox News (and a few other right-winged blowhards) are torn up over the recent pulp. Within the aforementioned issue, the “Sons of the Serpent” – a white supremacist group who likely thought Hydra was too Jewish – are taken to task by Wilson-Cap after they spout some Trump-esque declarations and threaten illegal immigrants with punishment by way of the power vested in me by the aforementioned God, Nature, et cetera, et cetera.

The only thing truly funny to me about the backlash by any media is how they’re attempting to rattle the cage of other non-comic book readers. They believe a conservative person who may or may not be a comic book fan to become upset over the political beliefs of a fictional character. What’s next? People storming at the gates of the WWE because John Cena supports his gay cousin? Perhaps a million-man march in Washington over reruns of The West Wing? The fact is that fictional characters are fiction. Meaning their views are at the behest of their creators. And Captain America, by way of Nick Spencer, is a progressive who wants to take a stand on the issues of the day. Is he wrong in choosing that direction for the character? Nope. Not even a little bit.

Marvel (and by proxy, their master Mickey Mouse) is wanting to capitalize on the continued success of their movie and TV franchises and get new fans into the comic book stores. By offering stories that aren’t ripped from the movies (shush, real comics fans), they are offering a tangential product that showcases how comics can build bigger universes than the motion-media can. And by incorporating storylines with characters charged by the same issues the populace is currently facing… they are making the attempt to attract people seeking more than just muscles and fights.

It’s at this point, Marc sits down at his set desk. Camera 1 rolls into a tight shot, as the title card “This is not a Seth Myers impression” flashes on screen.

What’s really awesome is that this is truly the first time ever comic books at Marvel (or any publisher for that matter) is using their medium to tell modern stories about the world around them. Because, you know, it’s not like the X-Men were an allegory for the civil rights movement. Or that the Iron Man was response to the Cold War when he debuted. Or that the current Batwoman, the new Earth Two Alan Scott, or Northstar were gay and had to deal with any relevant issues pertinent to their sexuality. Kudos to this new black Captain America for being literally the first comic book character to ever deal with a modern issue head on!

Ultimately, it wouldn’t matter to me personally if Sam Wilson were a progressive or tea-party member. I’d give no second care if Charles Xavier (or his ghost… I’ve lost count of his whereabouts) turned out to be a Nazi sympathizer all along. Hell, it’d paint his past fights with Magneto in whole crazy new lights! But I digress. The point is simple: Fiction is not reality. Making a stink over any piece of it is only relevant to the quality of the piece itself, not the politics that drive it. As with all comics characters: there are aspects to each character that must ring true. For Captain America – be he Sam Wilson, Steve Rogers, or Bucky Barnes – he must stand up for the people of his country. And that sentiment runs far deeper than any party line.