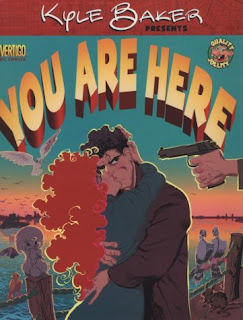 I don’t think anyone’s hired Kyle Baker to write screenplays for romantic comedies yet. But, from the evidence of books like Why I Hate Saturn and I Die at Midnight  and this book, I think he’d be really good at it: he has a knack for screwball complications and the kind of dialogue that only tangles up a complicated situation more, no matter how much his characters try to be clear.

You Are Here  is a romantic comedy with thriller elements, or maybe a comedy-thriller with romantic elements, published as an album-format graphic novel in 1999. It’s in what I think of as Baker’s “cinematic” style, with mostly wide panels over captions and dialogue and sound effects, looking like storyboards more than a traditional comic. His art is vibrant and full of color, with a painterly feel most of the time; I think it was mostly achieved through digital tools.

I have the sense that Baker’s work failed to hit its audience in this era, despite high-profile publications and some really good work. (I remember not-loving the “cinematic” format and Baker’s shift to glossier art and computer drawing tools art at the time; maybe that was part of it with the wider audience.)

But You Are Here is manic and zippy and fizzy and total goofball fun from beginning to end; it might not be old enough to be a “lost classic,” but it’s a damn good book that got very little attention, from a creator who I don’t think has ever gotten his due.

Noel Coleman is happy: he’s been living in bucolic splendor somewhere in upstate New York [1] with Helen Foster for the last year, blissfully in love and doing good work on his paintings. Unfortunately, he’s also lied entirely to Helen about his past, making himself out to be some kind of choirboy when he’s actually a longtime minor criminal who only recently went straight by painting scenes from various crimes and events he witnessed.

Now he needs to head south to the city to sell his apartment. If he does that, he can get rid of the last vestiges of his old life and return to Helen unencumbered and ready to completely live the lies he’s been telling her.

But she follows him. And a maniac killer, Vaughan Dreyfuss, is also after him: Dreyfuss killed his wife after finding out she was having an affair with Noel, and has now announced, on a live TV spot for his new bestselling book Yes I Did It and I’ll Kill Again, that Noel is next. And all of his old friends refuse to believe he’s gone straight. And the cops are no help with the Dreyfuss thing, because Noel is still sort-of wanted himself.

And so Noel is running frantically around New York City, trying to keep Helen from realizing he isn’t who he said he was, trying to keep away from Dreyfuss, trying to avoid as many of his old crime acquaintances as he can, and trying to just get back out of the city to peace and quiet.

That leads to nearly a hundred and fifty pages — big pages, with lots of action and activity and screwball dialogue and unlikely situations — of complication, before the inevitable collision of Noel, Helen, Dreyfuss, and Noel’s past. It all smashes up gloriously, and Baker spins out both a great confrontation/hostage scene with those core three characters, but a witty denouement after that, too.

Frankly, I think You Are Here is too big and too overstuffed to be turned into a movie, and the random nudity and violence of Noel’s lowlife NYC hangouts might be a problem as well, but it could be a glorious one if anyone ever did it right. Even if that never happens, it’s already a glorious romantic/thriller/comedy on the page. You might have missed it; a lot of people did. It’s worth looking for, these almost twenty years later. And, luckily for you, there’s a new edition, straight from Baker himself, just waiting for you.

[1] Upstate in the NYC sense — maybe Putnam county, maybe the Catskills, maybe the Hudson valley. Definitely no further north than Albany, which means not really “upstate” to anyone who lives there.