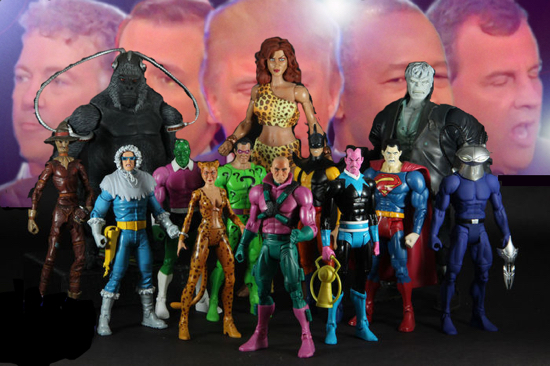 Let’s just get this out of the way, kiddos. I know ComicMix is a site built on the back of the abundance of comic book geek culture that is out there to cover and pontificate on. But I imagine all of you reading my column this week are likely nursing a hangover from catching Star Wars: The Force Awakens for the eighth time.

I tend to write my articles a few days before we post it up here on ComicMix. It just so happened on the evening I was penning this article, I put the Republican presidential debate on my second screen. I wanted to write about Batman, or Deadpool, or something heroic. Instead, I find myself with villains on the brain.

Make no mistake: I’m as left as left can go. In college – prior to watching The West Wing – I was more or less a moderate. I thought waging war on people half a planet away was a great idea; it clearly keeps the killing away from us. And I thought big government and tons of taxes meant less money in my pocket, and drug addicts getting to prance around with my tax dollars. And then 9/11 happened. And I found The West Wing. And I started paying a bit more attention to the world around me. Blah blah blah, yadda yadda yadda, and poof! I’m rainbow-flag-waving, democratic-socialist-loving, left-hearted-softy. But I digress.

Watching the debate between the Republicans on Tuesday evening felt like spying on the Legion of Doom holding their annual holiday bash – as moderated by an old, bearded Jimmy Olson. Everyone was given free reign to voice their mutually exclusive opinions, loudly, while an audience of well wishers hooped and hollered at the end of every verbal stanza. But with these words tic-tic-tacking on my left screen, and the infernal musings from the best the GOP had to offer in my periphery… I find myself staring at the space between my monitors “Wait, no, seriously? People are applauding this?”

Take for starters, the wave of opinions on global threats like ISIS. I heard things like “carpet bomb them until the sand glows in the dark”, “arm like-minded people over there to fight this on the ground”, and “we just have to do what we did the last time we were there!”. Really? The term “bad guy” was bandied about with as much frequency as “kryptonite” might at a Legion kegger. When asked direct questions about their chosen methodology and tactics? We got exactly what we’d get from Solomon Grundy or the Riddler: either odd non-sequiturs or feckless verbal gymnastics.

When the Legion, err, candidates (I guess?) weren’t pandering to the crowd of blood-thirsty gun-toters (I assume, as all liberals do), they were arguing amongst themselves. We were treated to Toyman and Black Manta sniping at one another over who would be allowed into Keystone City (in short: no one). Bizarro and Captain Cold spent time calling one another “chaotic” and “weak”. And all the while… Giganta prattled on how she was a woman, and Grodd demanded people remember he was a lawyer, and around September 11th. Funnier still then, that the silly ape forgot the time he hugged the Flash after Hurricane Sandy. I bet that pissed off the Weather Wizard something fierce.

By the end of the evening I was angry and exhausted. It was only in the wake of the in-fighting, hate-mongering, and Blitzer-bashing that a voice of reason flew in from the Internet. You know the Internet, right? It’s that thing you can turn on and off on a whim, because… America. Or science. Or something. Anyways. The voice was clear, humble, and weathered. “…not one word about income inequality, climate change, student debt, or racial justice. Not one serious idea to defeat ISIS — just chest-thumping.”

But what was this Supermench really hoping for? And to be fair: they did title it the “Foreign Policy Debate”, so not mentioning the problems at home isn’t that big a surprise. But, I get the deeper point: it’s not enough to spend 2 hours with 9 people who all basically agree that the Justice League can’t stop the bad guys, and it’s time to get busy snooping and killing, or get busy crying and dying. Like we do.

It seemed to me that last night, those who are desperate to lead us cared more about violence in the name of freedom, boldly telling lie after lie, and spewing fearspeak… then they cared about using insight and wisdom to suggest solutions to the problems we’re all facing.

Then again… care is a concept not held highly by super-villains.