Dennis O’Neil: Who’s Reality Is This? 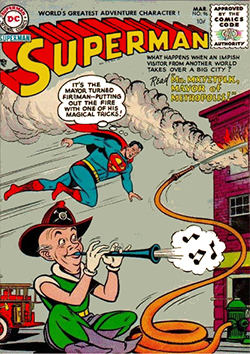 Look, over there – isn’t that Charlie Brown’s pal Linus, belly crawling through the pumpkin patch? No, not Linus, but somebody who’s awfully familiar. Let’s get closer and… Rats! Do you believe that?

It’s me, looking the way I look in photographs Mom used to keep in a chest of drawers – that is, like a skinny eight-year-old. And now I’m getting up, rising from the pumpkin patch like some pagan deity.

The question is, where will I be when I’m finally on my feet? Oh, the suspense is killing us! Okay, okay, maybe not killing us, but… I don’t know. Making us feel queasy?

Table that for now and have a look around. I’ve been here before, but when?

And suddenly I’m gobsmacked! Because I’m in the small store Dad and I stopped at after Sunday Mass that sold bread and milk and stuff like that and comic books and –  omygosh!, isn’t Superman #96? That’ll be worth a pretty penny on the collectors’ market.

Except that it won’t. In this reality, there are no collectors and so in this realty Supes 96 is worth the dime that is the asking price of most comics and… just exactly what is going on here?

The faithful among you may recall that some weeks back I mentioned “browsing” and sort of half-suggested that I might revisit the subject. Welcome to Revisitation Junction. And here we find young Dennis in progress, reaching for a copy of The Sub-Mariner and a cosmic page is turned – a cosmic reality that would be and our young time traveler 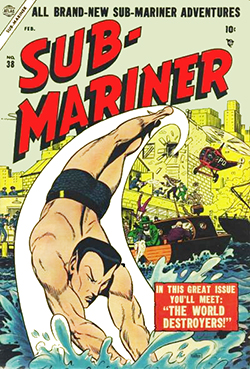 Is not so young and he’s still reaching for the Superman, but now the location is different; this store is very large and filled with all kinds of merchandise and the comic books are displayed on a wire rack that revolves and let us now pause and bow to the wondrous wire racks of my youth.

Brace for the turning of a cosmic page and –

Dennis doesn’t like where he is: what must be a bus depot in a large city. He’s wearing a Navy uniform (isn’t that a surprise!) The air stinks of cigarette smoke, the floor is encrusted with something black and probably lethal, and the comics in front of him are displayed in another wire rack, this one wide and flat, pushed against a wall. The whole scene is dirty and cold and depressing.

Join me in the turning of a cosmic page and –

Big contrast to the last destination. A very nice shop. Clean and well-lighted. Pleasant and comfortable. And full of comic books, some in foreign languages, and almost nothing else.

So. A shop that sells only comics. Has he somehow stumbled into some kind of science fiction?

What the heck! Maybe the best move is to go back to where it all started. Maybe this time he’ll run into Linus.