Molly Jackson: The Future of Enlightenment 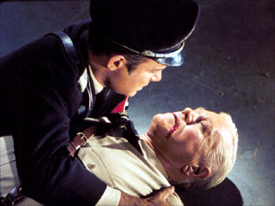 A good friend and writing partner is tired of me talking about Star Trek. She was never a Trek watcher but since it is the 50th Anniversary, she has decided to give it a try. Persistence really does pay off! Since she was finally watching Star Trek: The Original Series, I figured I would jump in too. It’s been a while since I watched any of TOS. Plus, I just finished rewatching Next Generation.

The original series was Gene Roddenberry’s true vision of a future where humans have evolved to become more enlightened, working for the betterment of humanity. So when I started to watch, I just jumped in where I had previously left off during another binge. (Thanks, Netflix, for holding my spot!) I jumped on Season 2 episode Patterns of Force.

If you haven’t seen this episode, it is when Kirk and Spock go looking for a missing Federation researcher John Gill and discover a planet full of Nazis. The planets of the system have been in a conflict, with the Zeons being hunted just as the Jews were. Kirk is forced to take action to save lives because the Prime Directive (which prohibits interference with developing cultures) was already broken by Gill restarting Nazi Germany.

It is a profound episode, showcasing the horrors of the holocaust. Even so, in 1968 when this episode aired Jews were still banned from clubs and businesses in America, still denied jobs and opportunities just because of their faith. By using this horrific event, Roddenberry was able, along with prominent Jewish actors, to remind the public that Jews were people just like them. Did it work? On a large scale, probably not. However, if it stuck with only a few people, those people could have grown to help end the cycle of hate.

This is the power of science fiction. It uses entertainment to teach us about the mistakes of the past and shows us the potential of the future. I can only wonder how Roddenberry would have reacted to our recent events. Mass shootings on the rise, with more groups targeted for religious affiliation, the color of their skin, or their sexual/gender orientation. I want to believe that he would have looked to take a stand against this ongoing cycle of hate.

It’s true that Star Trek never had a regular cast member that was considered LGBTQ at the time, but there were storylines throughout different seasons invoking those themes. I hope that the writers of the new show can continue Roddenberry’s practice of social commentary and have a LGBTQ character be a part of the show’s cast. We need to use the horrific act of violence in Orlando to change the image and social understanding of how any human, regardless of their sexual/gender orientation, should be treated.

In the episode I watched, the missing researcher tells Kirk “Even historians fail to learn from history and repeat the same mistakes.” It is a quote to think about. We, as a culture, are failing to learn from history. The attack against Pulse, an LGBTQ nightclub, sadly proves that. Unlike the TV show, we have no heroes beaming down to save the day. We need to learn to save ourselves. As a world community, we need to declare that ending the cycle of hate is our top priority. Our Prime Directive. This attack on the LGBT community isn’t the first attack but together, maybe we can make it the last.

If you are a member of the LGBTQ community, then you have my support. If you are an ally like me, then make sure you show your support. The world needs to know that this problem affects everyone, not just this small group of people. Together is the only way we can make the world a better place, and bring us one step closer to a utopian world of enlightenment.