Mike Gold: Or, Vill You Discovery? 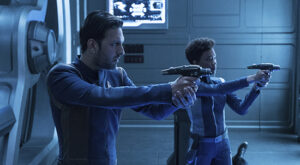 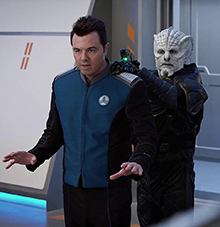 Much to my surprise, I really enjoy both Star Trek: Discovery and The Orville. I’ll wax on the latter first.

It’s hard to explain why I’m a Seth MacFarlane fan. Usually, I can only watch about 10 minutes of Family Guy — I like it, but after that my mind wanders in search of “plot.” That’s more than I can say for American Dad!, which bores me to tears, and The Cleveland Show, which I found to be insipid. Ted was hilarious, and I’m one of only two people I know who liked A Million Ways To Die in the West, the other being ComicMix’s own Martha Thomases with whom I saw the movie. And I’m certain I enjoyed it more than she did. MacFarlane executive produced Cosmos: A Spacetime Odyssey, which was so good I offered to throw Seth’s bail, should that become necessary. 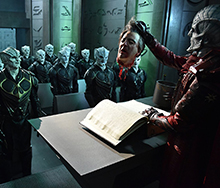 I thought he was fine as host of the 2013 Academy Awards, but that show is so overwrought that most of the hosts look better by comparison. An aside: I doubt I will live long enough to see my Oscar host-of-choice get the gig, but I think Henry Rollins really could pull it off.

I realize The Orville confuses those viewers who thought the show was supposed to be a satire of Star Trek. This is understandable, as that’s how Fox promoted it. But what do you expect? Fox has had a problem with science-fiction ever since Firefly. In fact, The Orville is much more of a tribute to Trek, particularly the original series. Coincidentally, lots of Star Trek people are involved in Seth’s show. 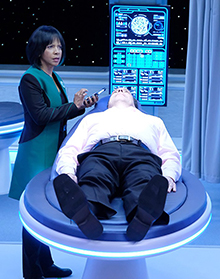 Yes, the show is humorous, but it’s neither parody nor satire. Most of the humor comes from the characters, particularly the two bridge lieutenants who drive the ship. The captain, Mr. MacFarlane, used to be married to she-who-is-now-first-mate, played by Adrianne Palicki, which is why you won’t be seeing her on S.H.I.E.L.D. this season. Some one-liners are tossed between the two, but in no case do any of the gags get in the way of the story.

Speaking about the story, I think The Orville is closest to the spirit and the tenor of Star Trek The Original Series more than any of the hundreds of Trek shows that follows, updated to contemporary times and shorn of some of the more tedious Trek clichés. And with much better special effects.

A quick note about one of the cast members. It’s about time Penny Johnson Jerald got a part that was worthy of her exceptional talent. She has a résumé that would impress the most jaded critic, but I haven’t seen her have such a vital and impressive role since The Larry Sanders Show. And, yes, she did voice Amanda Waller in one of the DC/WB animated features… and she did a fine job playing Kasidy Yates Sisko on Star Trek: Deep Space Nine. 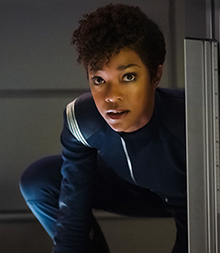 As for Star Trek: Discovery… it’s hard for me to think of a new teevee show that got off to such a rotten start. It was supposed to be the crown jewel of the new tollivison service “CBS All-Access.” I’m not sure why they thought they’d make a ton of money bringing Trekkers into their fold, but I’ll give that a pass as there are lots of ways to define “deficit financing.” However, the behind-the-scenes traumas getting Star Trek: Discovery out of dry-dock were so massive the program’s debut was delayed about nine months.

Worse still, the first two episodes were aired on the CBS network in order to seduce potential All-Access customers… and they sucked. The show doesn’t really become Star Trek: Discovery until the third episode when – minor spoiler alert – the star of the show Sonequa Martin-Green, playing Science Officer Michael Burnham, actually boards the U.S.S. Discovery. She’s been properly branded a traitor, so when Captain Lorca (Jason Isaacs) offers her a job that would keep her out of prison she seizes the opportunity. Burnham keeps on growing and getting more interesting with each passing episode – as does Captain Lorca. In fact, within the first half-dozen episodes Lorca, to me, has become the most interesting Starfleet captain in five of our decades. 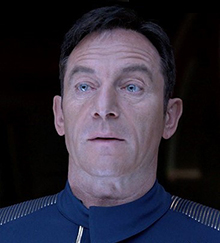 Well written and well-acted, if you saw the first two episodes and walked away shaking your head, Star Trek: Discovery deserves a second chance. I’ll bet you think better of the show within two more episodes – and if you stick around to #7, you likely will be hooked.

I watch The Orville and Star Trek: Discovery back-to-back. I have yet to get a feeling of redundancy, and quite frankly the humorous asides in the former helps take some of the weight off of the latter, which, like Star Trek: Deep Space Nine, can get very dark.

As for the contradictions with the hallowed Star Trek canon, I strongly recommend against fundamentalism so that you can enjoy a very good show.

Or, as William Shatner famously said, “Get a life.”