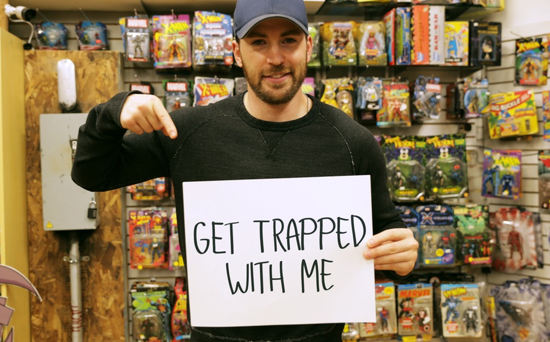 Scrolling through your Facebook feed, I’m sure you see them. They catch the eye with promises of grand adventures with exciting people. Sometimes you even see a fun video, with celebrities doing crazy things to unsuspecting people. That’s exactly what caught my eye when I saw this video of Chris Evans leading comic fans through an surprise escape room. It isn’t just a jest though. This prank is part of the pitch for his latest fundraising effort through Omaze.

In case you don’t know, Omaze is what celebs use to raffle off experiences to raise money for various charities. People can enter to win for as little as $10, which gets you 100 entries. If you want to spend more, you can get more entries as well as perk items like t-shirts, DVDs, key chains, and so on.

Like I said, you have probably seen links or videos for this website. And you’ve been intrigued by the chance to try your luck. It started with two guys who had a dream to meet Magic Johnson and an opportunity to win it in an auction. They realized there was no way they could afford to bid to win a chance to hang out with them. Rather than just let their hopes be dashed forever, they turned their frown in something positive and Omaze was born.

I’m still super curious about how they got that name though. Omaze sounds more like a stage magician obsessed with alliteration. The Amazing Omaze!

Buying a chance to win like the old school raffle makes it more affordable while raising more funds for those in need. Granted, with the popularity of this site and its wares no one has the best chance to win. I’m guessing that is why they also have some products for sale, both through individual campaigns as well as in the store.

If you haven’t guessed already, this is also a great promotional tool for films as well. It’s become quite the popular site with many of the geek-related films. Ben Affleck raffled off a chance to join him on set at Batman V Superman to support three global charities. Chris Pratt used Guardians of the Galaxy 2 to help build a teen center in his hometown. Both did fun videos that entertain. Honestly, you could fall into a Omaze youtube video hole for a bit. Watch Bon Jovi surprise karaoke singers and Robert Downey Jr. hop around in a bunny suit.

So, yes, this may just be a PR stunt. But geeks are well known for their charitable giving and activism. I’ve even spent time writing about how great our geek community is about fundraising. This site makes that even easier for more people around the world to take part. And for those who need the incentive, celebrities are willing to give their time to see it happen. And it has worked. Over 170 countries have given to over 150 charities around the world.
The video I shared earlier where Chris Evans kinda tortures comic fans? He is doing it to raise money for Christopher’s Haven, a group that helps support families who have children being treated for cancer in the Boston area. In today’s society, we need all the support that we can provide to charities and people in need. The world is a scary place. If we all come together and support each other, the world can be made better. Every person can make a difference.

And if I can make a difference while hanging out with Captain America, that’d be cool too.