Before I jump into this week’s column, I wanted to touch on Iceman #1 since I’ve mentioned it so many times prior to its release last Wednesday. It was a solid first issue and I really love how Sina Grace handled the dynamic between Bobby Drake and his parents. Give it a shot if you haven’t already!

Moving on… There is currently a Kickstarter up for a superhero mockumentary, Zero Issue. It’s being run by the New York Picture Company – Matt Cullinan, Zach Bubolo, and Jim Fagan. They have a little over a week left and have nearly reached their goal.

I got the chance to chat with Matt, Zach and Jim about Zero Issue, what inspires them, and where they got the tuxedos they wear in their Kickstarter video!

Joe: Thank you for taking the time to chat with me about your short film project, Zero Issue, Matt, Zach, and Jim! To start things off, can each of you give me a one-sentence pitch for Zero Issue?

Matt: Sure! Zero Issue is a superhero mockumentary about a loser hero trying to make a name for himself, and when his plans fail he has to figure out what lengths he’ll go to achieve fame.

Jim: I think mine would be “take every crippling fear of failure you have, mix it with your love of comic books and comedy, and watch them make a beautiful baby.”

Zach: I like that. Mine is “imagine if The Office, Chronicle, Avengers, and Best in Show were mashed into one movie, and you’ve got Zero Issue”.

Joe: You all list a lot of inspirations for this story in the Kickstarter which are great. How did this idea come to be though? Did one of you share the begins of an idea with the others, did you all have a eureka moment watching a movie together, or was it something else entirely? 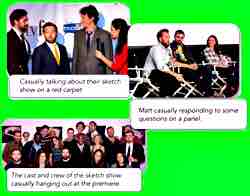 Jim: Yeah, we were doing a lot of pitch creation for other people and we felt “hey, we need to go back to doing our own thing again…” we all knew we wanted to make a short film, share our voice with new people, connect to new parts of the industry… we just had to figure out what we wanted to say.

Zach: To generate ideas we actually use this collaborative process called “Design Thinking” and after rounds of brainstorming, cutting up magazines, writing ideas on post-it notes, we had a eureka moment in this coffee shop in Queens.

Jim: We were talking about genres we loved (and maybe it helped we were in Spider-Man’s home neighborhood of Forest Hills and next to a comic book shop) and we said: “what would our version of a superhero movie be?”

Joe: This is a superhero mockumentary. How did you decide that this was the best way to approach this particularly story?

Jim: I love the genre – it’s the reason I work in film and TV – that kind of story is the kind I’ve always wanted to tell: unfiltered, raw access to your characters. It takes any subject matter and makes it feel real and insanely funny. As far as the three of us go, it helps we have a shared obsession with the IFC show “Documentary Now” – once we knew Dale’s story and the story of this Superhero Festival we started thinking about an episode of Doc Now that shows you a whole world of an Al Capone Festival in Iceland in 22 minutes. It’s a perfect fit.

Zach: We also loved Taika Waititi’s What We Do in the Shadows (about vampire roommates in Wellington, New Zealand). That proved you could make a hilarious and compelling sci-fi story as a mockumentary.

Matt: Plus, early in our careers, Jim and I cut our teeth making reality and non-fiction television so as a genre we had a lot of experience executing it for networks.

Joe: The main character, Dale Dinkle, has super powers and wants to be famous. Can you tell us a bit more about Dale? What kind of things can we expect from Dale over the course of the story?

Zach: Dale is a bit of all three of us – he has a little bit of talent, he was told he’s special his whole life, and now he’s a 30-something and decidedly not special. He is desperate, confused, and disappointed that he hasn’t made it to the big time.

Matt: His power is that he can move objects with his mind – which is cool – but he’s not super powerful. He can’t float the Golden Gate Bridge like Magneto.

Jim: His mind-moving power is probably like Yoda in Empire. He could move an X-wing, but it would take a lot of effort… and he doesn’t tap into that until he gets a little dark side in him. 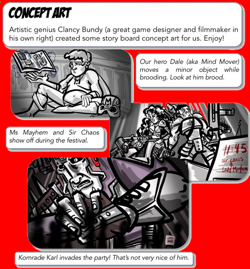 Matt: Ohh, is that a tease?

Matt: Over the course of the story expect of lot of him scrambling in desperation to prove how special and important he is.

Joe: What other kinds of characters and super powers can we expect to see in Zero Issue?

Zach: She’s like Jessica Jones, but with the power of Phoenix.

Matt: But she gives no fucks. Which is awesome. Another aspiring hero is Hoover, a teen with a lot of social-anxiety. We thought that kind of character would be an original addition to the superhero genre.

Zach: He can literally suck the life out of a room, like Rogue, but he doesn’t absorb any powers. And like Sarah, he’s scared to fully use his powers.

Jim: The Zero Issue Universe is how our brains feel when we think about all the characters from all the decades of comic books we love. It’s like when you’re a kid and you take out your action figures from 12 different sets – X-Men, HeMan, Batman – they don’t care they’re from different “worlds” they just wanna kick some ass. Only in our movie, they attend symposiums on getting a superhero talent agent.

Zach: There’s the leather clad, machine gun wielding Miss Mayhem and Sir Chaos from the 80s, there’s Lady Marvelous, who is an aging Golden-Age hero from the 50s, and Hercules, the original superhero, who is literally from 200 BC.

Joe: Switching gears for a minute, there are a lot of Kickstarters out there lately and people like knowing that they’re pledging to accomplished professionals, which you all are. Could you each name one or two professional projects you’ve worked on that you’re particularly proud of?

Jim: Yeah, and we think that’s something special we bring to the project. This isn’t our first rodeo. We’ve made shows for networks and brands – I’m particularly proud of my work running a show for ABC called People’s List and my work on PBS’ Danny Elfman’s Music From the Films of Tim Burton.

Matt: A lot of my work is in the documentary television space. I probably peaked when my childhood dreams came true and I worked with Mark Hamill on a piece called Raiders, Raptors, and Rebels: Behind the Magic of ILM. I also recently wrote and produced When We Rise: The People Behind the Story for ABC.

Zach: As an actor I loved working on the video game Grand Theft Auto V, and as a producer, I’m actually going to say that I loved our work on NYPC for Cooking for One with the Crying Chef.

Joe: Whenever comic book fans hear about someone doing a project about superheroes, they like to hear about the comic books that inspired them. What comics have you read over the years that gave you an appreciation for the superhero genre?

Zach: My dad was a comic book collector in the 80s, and he loved showing me the milestone issues of the comics he collected: like Silver Surfer #1 or when Spider-Man got the symbiote suit, or the original Teenage Mutant Ninja Turtles by Eastman and Laird, or The Phantom. Recently, I’ve been really into Faith and the Ta-Nehisi Coates Black Panther series “A Nation Under Our Feet”.

Jim: I think my introduction was through Saturday morning cartoons. The X-Men show was pretty influential to me. Everyone hum the theme song to yourself, I’ll wait… good. And when the New 52 came out I was obsessed with the new spin on Aquaman. And in the past year or so, I’ve really liked the Star Wars comics, specifically the Darth Vader run.

Matt: Honestly, I feel like early on in life a lot of my exposure to the world of comics came through the world of video games. So X-Men was huge for me. I spent a lot of time playing those games on the Sega Genesis (shoutout to Nightcrawler). Even more than video games, movies have always been my gateway to comics: the Burton/Keaton Batman films, TMNT, and later Hellboy, Blade, and Spawn. And graphic novels. Oh, and Y: The Last Man. I’ll stop now.

Zach: Other non-comics, but books we love and that give us a deep appreciation of comic lore are Soon I Will Be Invincible and Grant Morrison’s Supergods: What Masked Vigilantes, Miraculous Mutants, and a Sun God from Smallville Can Teach Us About Being Human.

Joe: In the Kickstarter video you’re all wearing tuxedos. Did you rent them or do you own them?

Jim: Mine is my dad’s! It’s ill-fitting!

Matt: Yeah, I bought mine when I was a best man for a wedding. I give a helluva toast.

Zach: I ordered mine from Amazon. Only ninety dollars!

Jim: Less if you return it after!

Joe: Though the initial goal is to raise $30,000 you have a stretch goal of $100,000 to produce a full-length feature film instead and the script is already written. Can you tell us more about what we can expect in a feature film and why it’s so important that you make it to $100,000?

Matt: Yes, the dream is to make a feature. But to make a movie with lots of special effects and lots of locations, characters, and cool costumes you need a whole lot of cash.

Jim: The feature would focus not just on Dale but other aspiring heroes. In this short, we introduce you to Sarah and Hoover but in the feature, they take over a bit more. The short is Dale’s story, our story… the feature is a bit larger in terms of story. You would also see a lot more of the “normal,” the townsfolk, and how the divide between the two groups would become irreconcilable. Christopher Guest is a master of creating a movie with several leads that you’re all cheering for.

Matt: The short would be the first third of a larger story. We’d move past the point where our movie ends and follow these three characters as they develop beyond the competition and intersect when their powers have all matured.

Zach: We think the short is incredibly strong – we tell a compact story, with one lead and a huge supporting cast, in twenty-two minutes. It’s going to have everything you could want from a superhero story: powers, humor, characters you care about, and a climactic battle.

Zach: The best place for people to go right now is the Kickstarter page – no matter how much you give, whether it’s one dollar or one thousand, you’ll get on our mailing list and get all of our updates. Last week we released some insanely cool concept art early to our backers.
Matt: Plus you’ll be supporting the creation of a brand new superhero movie!

Jim: After the Kickstarter, the best place for all our news and updates is our Facebook page.