Molly Jackson Is Preparing For The Future 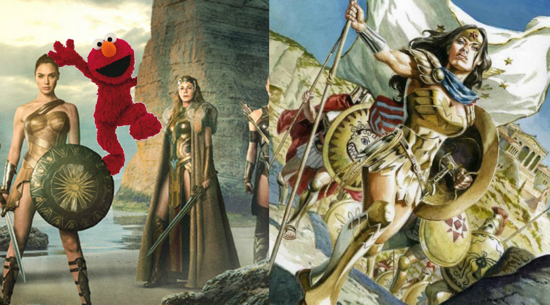 This past weekend was the arguably biggest event on the geek calendar, San Diego Comic Con. It is an explosion of headlines, news clips, and video spots that most geeks salivate over. However, I was not one of them. That’s right, I spent the biggest geek weekend of the year creating Sesame Street characters out of fruit. It was awesome.

My niece, Baby Destructo (as I call her), turned three last week and wanted a Sesame Street birthday party. Elmo is kiddie crack, I swear. As she is my very favorite person to spend time with, my family and I spent the weekend trying to make it the best day of her year.

Hanging out with a three-year old is a reminder of how active an imagination can be. She was always pointing to nothing and seeing trains or butterflies coming through the house. She makes force lighting and names everyone after My Little Pony characters. We sat together and she read books to me, and even has her favorite book memorized.  My personal highlight though was when she pointed to Spock on my t-shirt and said “I like him.”

Towards the end of the weekend, when she was all passed out from playing her favorite game of me chasing her through a museum, I finally got to check out some of the highlights from SDCC. I was particularly disappointed to see some news pieces. A male con staffer decided to hijack a Women in Film Production panel to teach the panelists about the film industry. I can’t quite understand why, but he thought that he needed to help the female panelists explain their careers and run their panel for them. Then I checked out the reviews of The Killing Joke. I admit, I haven’t seen the film yet but the descriptions I have read are not promising. They took Batgirl, whose part in this comic is small in itself, and added a storyline that made her a lovesick child who only seems motivated by a man.

I was excited to see the Wonder Woman trailer; it was a surprising breath of fresh air after reading some of the others. It was a strong woman standing up and being an equal partner with a man while fighting for the equality of others. I would love to see more of strong female characters in all media, but what really hurt was seeing that a strong female character was dragged down. Mostly though, I think about the world that my tiny, imaginative, smart niece is growing up in.

Media will shape her more than any generation before her. She will grow up in a world where equality is an active topic, where in her formative years a woman is the first presidential nominee for a major American political party. But in the same breath, entertainment has dragged its feet in making changes. Every time we get a Ghostbusters or Buffy, another demeaning instance seems to rear its ugly head.

We have a responsibility to the future to make sure that our entertainment is diverse and equal. And in some ways it seems silly. After everything that has happened, this fight should be over but the current climate of this country has proven otherwise.

I want my niece to grow up in a world where she is treated equally along with everyone else. So the next time you read something that is not quite right or hear a joke that uses a minority group as the punchline, think about the future you want for the next generation.

Halloween is our favorite holiday, so while we decorated the house this week, we decided to share our list of the 13 Best Not Scary Halloween Movies….because we don’t do scary. (This week’s Scream Queens had us sleeping in the same bed, which we think illustrates our level of scary show discomfort.)

We hope you don’t feel cheated, but we’re doling out our list the way mean moms dole out Halloween candy. We give you numbers 13 through 7 and a bonus mini-review of The Rocky Horror Picture Show, which we just saw in the theater for it’s 40th Anniversary. And then next week we’ll be back with 6 through number 1 and probably some honorable mentions — because really, Halloween movies are the best!

While at Long Beach Comic Expo, we were lucky enough to chat with some of the writers and artists of IDW’s My Little Pony comics.  We talk with Agnes Garbowska about drawing Pinkie Pie’s ever growing hair and the difficulty of Rarity’s tail.  Christina Rice tells us about what it’s like to write the comics and how she’s like Rarity.  And Katie Cook not only gives us her backstory, but also lets us talk to her about one of our favorite Spiderverse superhero ever — Penelope Parker who acts EXACTLY as a tween girls should finding out she has spider powers….ewww, gross!

Attention Bronies: My Little Pony – Friendship is Magic: Adventures of the Cutie Mark Crusaders was released on DVD this week.  As you know, a pony’s cutie mark shows their special talent on their flank for all to see, but what if you’re a pony who hasn’t figured out how you are unique yet?  Cutie Marks are the quest for the Cutie Mark Crusaders and this DVD features them in 5 episodes (well, really truly only 4 because “Pinkie Pride” is about Pinkie Pie’s party planning showdown with a pony called Cheese Sandwich, voiced by Weird Al), plus bonus features like coloring pages, a sing-a-long and digital wallpaper.  All the details are in this week’s video…as well as our true feelings about Scootaloo and Rainbow Dash.

In an attempt to start your week off right:

Now that it’s officially autumn, we’re ready to jump right into Halloween.  Thankfully, Shout! Factory has just released Spooktacular Pony Tales, a collection of six My Little Pony: Friendship is Magic episodes (along with extras like pumpkin stencils & a sing-a-long!) to help us ease into probably the best holiday ever!  Of course, we’d watch Pinkie Pie in a chicken costume any time of year.