Graham Chapman, probably best remembered from Monty Python as “the dead one”, writes and stars in the animated movie of his own life story, A Liar’s Autobiography. Although Chapman selfishly passed on, became no more, ceased to be, expired and went to meet his maker, became a stiff, went off the twig, kicked the bucket, shuffled off his mortal coil, run down the curtain, joined the bleedin’ choir invisible, and became an ex-Chapman in 1989, he had taken the trouble to record himself reading his autobiography — and those recordings have now ingeniously been used to provide Chapman’s voice for a 3D animated feature.

Not quite a documentary nor a Monty Python film,  A Liar’s Autobiography is Chapman’s own take on his bizarre life and his search for self-knowledge, bringing Chapman back to life in an ingenious tour de force of animation, told through 17 different animation styles from 14 different animators. Fellow Pythons John Cleese, Terry Jones, Michael Palin, and Terry Gilliam also turn up, playing themselves and other characters, along with a few surprise guests.

Incredible, yes. Surreal, certainly. True? Who knows? At his memorial service, John Cleese called Chapman “a freeloading bastard”. Now, as the film re-unites Chapman with Cleese, Jones, Palin, and Gilliam for the first time in 23 years, he is set to earn a new title — the most prolific corpse since Elvis.

A Liar’s Autobiography — The Untrue Story of Monty Python’s Graham Chapman, will premiere on EPIX and in select U.S. theatres in 3D on November 2, 2012, and will be released in the UK by Trinity sometime in early 2013. 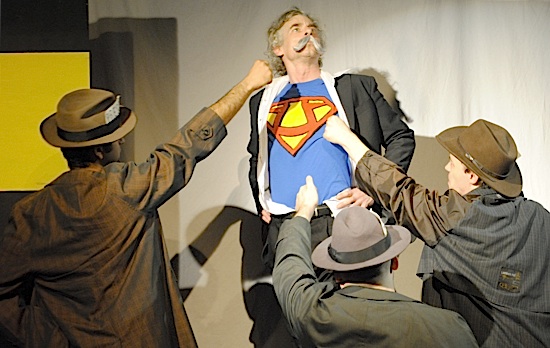 In our era of Existential angst, ain’t it time that we make time to laugh at our messy human selves? If you’re ready for a good dose of some of that and just in time for New York Comic Con this weekend, join the folks at the much-lauded Brick Theater in Williamsburg, Brooklyn with the award-winning Impetuous Theater Group’s production of Crystal Skillman’s [[[Action Philosophers!]]], directed by John Hurley, based upon the comic books of the same name written by Fred Van Lente (married to the playwright) and illustrated by Ryan Dunlavey (reviewed here plus interview with Fred last year). First mounted for the Comic Book Theater Festival in June, this retooled upgrade has 50% new cast.

You’d think that turning a truly comic book into a comedy would be a piece of cake! Wrong-o-roonie! As the dynamic duo of Skillman & Hurley discovered, it’s a challenge. But they kept this Philosophy professor very happy (they could pass my mid-term!). The result: it’s philosophical history a la Monty Python on Crack. Fasten your safety belts and keep your arms in the ride at all times.

END_OF_DOCUMENT_TOKEN_TO_BE_REPLACED 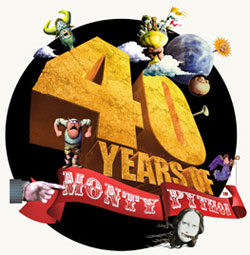 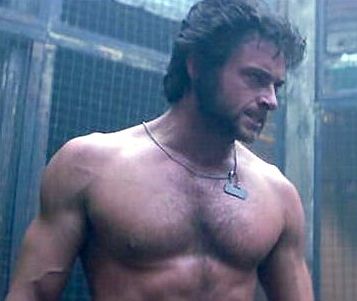 It’s a good day for Monty Python fans.  First, Amazon is offering the just-released box set of the entire pioneering television deeply discounted for 24 hours. The normal $99.99 list price is down to a mere $39.99 until midnight.

Meantime, the Monty Python troupe now has a YouTube channel featuring about 24 collections of clips, outtakes and interviews with the gang. And instead of pretending its all about getting to know its audience, the group admits the channel is a direct ploy to sell Monty Python DVDs and merchandise, utilizing YouTube’s new partnership with Amazon (see above).

Kim “Howard” Johnson, author of the just-released memoir Monty Python’s Tunisian Holiday: My Life with Brian, will appear live at Chicago’s i.O. Theatre, 3541 N. Clark Street (phone 773-880-0199), at 8 p.m. on Tuesday, November 18, to present, for the first time ever, his 30-year-old vacation slide show as he reveals secrets behind the filming of Monty Python’s Life of Brian. The event is free and open to the public.

Monty Python’s Tunisian Holiday: My Life with Brian Live! will incorporate many of the photos presented in the new book, and many more never before seen, Johnson will discuss the filming of the comedy classic and his life, times, and strange adventures with the six members of Monty Python.

“I’ve always enjoyed subjecting small groups of friends and relatives to my slides of Yellowstone Park and the Wisconsin Dells,” says Johnson. “So you can imagine how thrilled I am to be able to subject an entire audience to every minute detail of the Stoning Scene, the fate of George Harrison’s money, and the long-censored secrets of King Otto and Mrs. Pontius Pilate.

In addition to writing five books on Monty Python, Johnson is also co-author (with Del Close and Charna Halpern) of the improvisation manual Truth in Comedy and the author of the acclaimed biography of improvisational guru Del Close, titled The Funniest One in the Room.

A limited quantity of books will be available for purchase at the event. 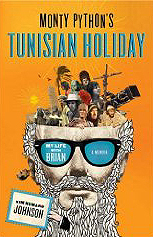 Well as careers go, here’s a good one. Start off writing a fanzine and wind up working with and for Del Close and Monty Python and, specifically, John Cleese. Then you get to write all kinds of books about your labors.

Long-time comics journalist and frequent ComicMix commenter Kim Howard Johnson has a new book out called Monty Python’s Tunisian Holiday. It’s a misnomer; Monty Python was in Tunisia to work. They were making a movie. Monty [[[Python’s Life of Brian]]], to be exact. But few would buy a book called [[[Kim Howard Johnson’s Tunisian Holiday]]] unless it had a lot of sex in it, so the title choice is obvious. So are the contents: it’s Howard’s account of his time with the Pythons in Tunisia filming [[[The Life of Brian]]] and touches on his time on-stage with the group at the famed Hollywood Bowl concerts (Howard’s a professional, trained by no less than Del Close).

This is less of a companion volume to his [[[The First 200 Years of Monty Python]]],[[[ And Now For Something Completely Trivial]]],[[[ Life Before (and After) Monty Python]]], and [[[The First 280 Years of Monty Python]]] than it is Howard’s story chronicling his experiences as both a performer in the movie and a journalist covering the shoot. As such, it’s more of a companion volume to Michael Palin’s recently released autobiography Diaries 1969-1979: The Python Years (I highly recommend the audiobook version, read by Palin). It’s witty, it’s thorough, and if you’re a Python fan or a movie nut, it’s completely vital.

O.K. Cool, Howard. Great job. Now go do that biography of the Bonzo Dog Band I’ve been wanting so desperately.  Ummm… after you finish that [[[Munden’s Bar]]] story you’re doing with…

Doctor Who in Review: Season Four, Episode #8 – Silence in the Library

Every week, I’ll do my best to go through the most recent episode with a fine-tooth comb (or whatever the "sonic screwdriver" equivalent might be) and call out the highlights, low points, continuity checks and storyline hints I can find to keep in mind for future episodes. I’ll post the review each Monday, so you have ample time to check out the episode once it airs each Friday at 9 PM EST on Sci-Fi Channel before I spoil anything.

Missed a week? Check out the "Doctor Who in Review" archive or check out any of the past editions of this column via the links at the end of this article.

END_OF_DOCUMENT_TOKEN_TO_BE_REPLACED

Life of Groundhog, by Ric Meyers

Oh, it’s been a good week. Two of my (diametrically-opposed) favorite comedies are coming out on remastered special edition DVDs this coming Tuesday (one which was embraced by all religions while the other was roundly condemned by all religions) and I could hardly be happier. The operative word here is “hardly,” because, for while both DVD editions are good, one, in particular, could have been great.
But this is sour grapes on my part. I love Groundhog Day, and appreciate the skills of its star, Bill Murray, so much that I shouldn’t begrudge his disinterest in participating with the 15th Anniversary release’s special features – but yet, I still do. I shouldn’t be so petty, too, because of Bill’s absence, the true value of director/co-scripter Harold Ramis comes into sharp focus.
I’m a big fan of Ramis as well, ever since I saw him as harried station manager Moe Green on the original import of the milestone Canadian comedy series SCTV. I can never forget his delivery as the evil boss in the show’s satire of The Grapes of Wrath, The Grapes of Mud; “You think this land is urine … but it’s all our land, not just urine” (you had to be there, I guess).
Ramis left SCTV early, which I also begrudged, come to think of it. But all was forgiven when he started helming, or being intimately creatively involved with, such comedy mainstays as Animal House, Caddyshack, Ghostbusters, As Good As It Gets, and Analyze This. Groundhog Day could be his masterpiece, however, given that it’s a romantic comedy fantasy classic.
Columbia Pictures, minus Murray’s input, could only muster a single, pretty poorly photoshopped, disc, but Ramis is all over the extras. There’s a commentary with him, which I lapped up with my admiring head nestled on my hands. There’s also a video talking head grandly titled “A Different Day: An Interview with Harold Ramis,” which I watched appreciatively with my chin on my fist. Then there’s the making-of doc called “The Weight of Time” (borrowing a phrase by story creator and co-scripter Danny Rubin), which I watched with the back of my head resting on my sofa top.

END_OF_DOCUMENT_TOKEN_TO_BE_REPLACED

My lord — it’s been days since we ran anything about Doctor Who. What sort of a comic book weblog are we if we don’t talk about a British TV show?

Peter Davison, a.k.a. the fifth Doctor (and star of Campion and The Last Detective), is set to play King Arthur in the West End production of Monty Python’s Spamalot. The 56-year-old, also known for his role as Tristan Farnon in All Creatures Great and Small, starts July 23.

The musical, based on 1975’s Monty Python and the Holy Grail, has won three Tony Awards on Broadway. Loosely based on the legend of King Arthur, Spamalot features flatulent Frenchmen, a legless knight and a killer rabbit. It was written by former Python Eric Idle, who incidentally recently unveiled his long-promised next project Not The Messiah (He’s A Very Naughty Boy) at Toronto’s Luminato festival.

So it wasn’t just an Idle promise.