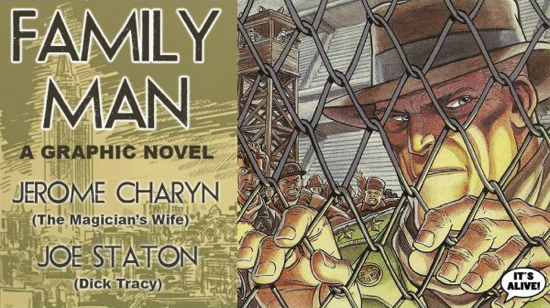 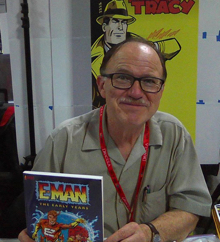 Drew Ford has spent the last few years of his life dedicated to bringing classic out of circulation comics and graphic novels back in print in beautiful restored editions. A fierce advocate for creators such as Sam Glanzman, Drew has brought back multiple books of his work, a graphic novel from David Michelinie, another graphic novel from ComicMix’s own Denny O’Neil, and many more. This was originally done through Dover Publications until Drew founded It’s Alive! Press, an imprint of IDW.

Drew’s latest project is bringing Family Man, by Jerome Charyn and Joe Staton, back in print through a Kickstarter campaign. You can view the campaign here.

I got the chance to interview Joe Staton this past weekend about Family Man.

JC: Thank you so much for taking the time to talk to me about today about Family Man! Before we get into that, you’re a comics veteran with over forty years of work under your belt. You’ve worked on comics like E-Man which you co-created, All-Star Comics, a long run on Green Lantern where you created the Omega Men with Marv Wolfman, and have more recently worked on the classic character Dick Tracy. Which of all your comics work is most meaningful to you and why? 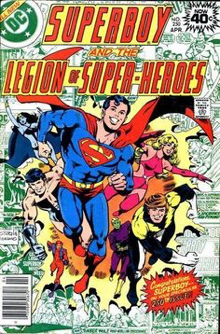 JS: And thank you for the interest in our project. You’re right, I’ve been at this for a while. I suppose if I come down to what’s the most important to me it would be E-Man, the Helena Wayne Huntress, my runs on GL with Marv and Steve Englehart, and my current work on the Dick Tracy strip. I had the chance to develop characters sort of off on a tangent from what was expected. E-Man was somewhere on the border of funny and serious, Helena was the product of Earth II, where everything was an alternate take on DC history, my work on GL got me into visualizing SF aliens, always some of my favorite stuff. Tracy, I’ve always wanted to do. With Mike Curtis we’re trying to plug into classic Chester Gould while seeing Tracy as part of pop culture from the 20s up through now.

JC: Since I’m a big Legion of Super-Heroes fan and have read a lot of your work on it, I was wondering if you could humor me and talk a little bit about your time on that title.

JS: Paul Levitz brought me into the Legion without me knowing a lot about them. I was supposed to be part of a rotation with three or four other guys but for one reason or another, they dropped off and I wound up doing the most of a run. I was never able to get a handle on the characters as super-heroes so I got into the science fiction elements. It’s just lately that I’ve realized that the heart of the series is “teen romance in space.”

JS: One hour into the future, society and government in New York City are crumbling. The only forces that still maintain order are the Mob and the Church. Alonzo, a gangster, and his brother Charles, the monsignor, face each other for control.

JC: So how did you end up collaborating with Jerome Charyn, a very accomplished writer in his own right, but not so much in comics? 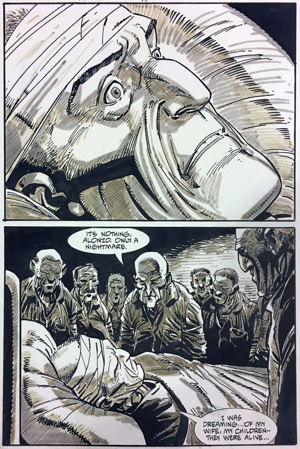 JS: Editor Andy Helfer was putting together a line of nontraditional crime books mixing regular comics types and people from outside. He knew that was something that I would be up for. I was originally scheduled to work on a book with Pete Hamill but Pete never got his script in and Andy suggested that I might work with Jerome. I had read Jerome’s work and thought that was a good idea. I’ve recently learned that Jerome had originally wanted to be a comics artist. But rather than go that way, he’s written around 50 novels and nonfiction. His earlier interest in art made it natural for him to describe visuals to tell a comics story.

JC: The vast majority of your published comics work at this point in your career was in superhero comics. What did you have to do differently to tackle a story like this? What was the same?

JS: Much of my work was in super-heroes, but partially that was just a function of what was being published. There was work in super-heroes. And even then, as I mentioned earlier, I’ve often wound up working on stories that are a bit outside the usual take on heroes. And I do have a history with crime and detectives. E-Man’s sidekick is Michael Mauser, the unsanitary PI. I worked on the Mike Danger comic strip with Max Collins. Chris Mills and I have our series Femme Noir, which was originally a tribute to The Spirit. My basic interests are SF and crime stories, rather than so much super-heroes. Turned out Family Man was a good fit.

JC: Much of your prior comics career was in monthly comics. Family Man was originally done as three 96-page digest comics. How did you approach working in this format? What were the challenges and benefits of it?

JS: I was drawn to comic strips when I was a little kid, especially Dick Tracy and The Phantom. I learned to think in terms of comic strips before I came to comic books. Jerome had quite conveniently written Family Man as four-panel and it would be in a square format. Four panel, square, lay them out in a row, and you have a comic strip. There is occasionally a two-panel page, rarely a single panel splash, but the comic strip concept still fit. For me, it wasn’t a question of monthly as opposed to a limited format, it was going from comic book pages to comic strip. Since Family Man wasn’t going for super-hero exaggerated foreshortening or pyrotechnics, it was comfortable in the squares.

JC: What about Family Man makes it an important story to you? 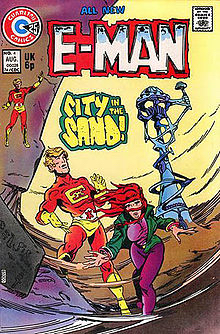 JS: In terms of what a “graphic novel” actually means, we need to remember that Jerome is an accomplished novelist. A novel usually implies layered storylines and characters and that’s what Jerome has provided here.

JC: It’s been twenty-two years since Family Man first came out and it has not been in print for the vast majority of that time in between. What about this story rings true today and would attract a new generation of comics readers?

JS: “One hour in the future” turned out not to be the future when the book was written but with us turning away from the structures of government and society it may be a future around the corner today.

JC: Why is It’s Alive Press the best place for Family Man and why is crowdfunding the best way to fund reprinting it?

JS: Drew Ford is repackaging solid projects that didn’t quite find their audience, maybe because they never had a proper collection or came out from smaller presses or whatever. Things like Sam Glanzman’s USS Stevens stories, Trina Robbins’ Dope. Family Man should be right at home at It’s Alive Press.

JC: Before we wrap this up, I want to thank you again for taking the time to talk with me and ask you if there is anything else you’d like to mention about the Family Man Kickstarter currently running or if you had any other work you’d like to note?

JS: As we’re speaking the Kickstarter still has a bit of a way to go, a few days left and some cash still needed. I hope everybody will head over there and contribute and get some nice premiums. As for other things, keep an eye out for an upcoming issue of Charlton Arrow, which will start to feature a new three-part E-Man from Nick Cuti and me. That should be out this summer. And I continue to draw Dick Tracy with writer Mike Curtis, available here. We just lately finished the big crossover between Dick Tracy and The Spirit. It’s all archived at GoComics.

And thanks again for the chance to plug Family Man, Joe.