Tagged: Let me be brave 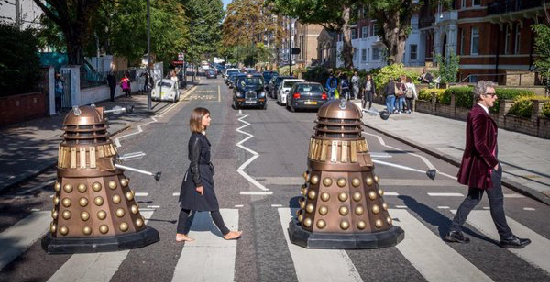 It’s because it was all over the Internet, including an interview with Doctor Who show runner Stephen Moffat, that Jenna Coleman, a.k.a. Clara Oswald, a.k.a. The Impossible Girl, was leaving the series and that her exit would be horrible, dramatic, terrifying, and final – or words to that effect, anyway.

And it really wasn’t.

I don’t blame Peter Capaldi or Jenna Coleman for this; both of them turned in their usual brilliant performances. I don’t even blame Stephen Moffat all that much; he has to answer to the higher-up-the food-chain suits.

Those are the ones I blame – the suits who are obviously so frightened that Doctor Who will lose its “worldwide phenomenon” (as the New York Times called it around the time of the 50th anniversary) status and return to where it belongs – the little show that could, the ½ century-old cult that, like a Time Lord, regenerates itself every so often to become an obsession with a new generation of fans.

Seriously, guys, your obsession with keeping the media spotlight on Doctor Who since the 50th anniversary and The Day of The Doctor has become so relentless that I’m expecting any moment to see an announcement from you that Peter Capaldi wiped his ass after taking a shit.

Memo to the Doctor Who marketing department:

Let it be, already.