Today it’s easy to understand fans and creatives admire and envy the career of a guy like Robert Kirkman, who published his comic, The Walking Dead and then achieved great success as it became a top TV show. Or fans might think about how Thor was a 60s Marvel comic and now it just dominated the box office this weekend.

But for a prior generation, Charles Schulz, Milton Caniff, Alex Raymond and Hal Foster were the big success stories. Their efforts on Peanuts, Terry and the Pirates, Steve Canyon, Flash Gordon, Rip Kirby, Tarzan and Prince Valiant were all in newspaper comic strips and not in comic books. I wasn’t that long ago that a comic book artist would have yearned for a successful newspaper comic strip. 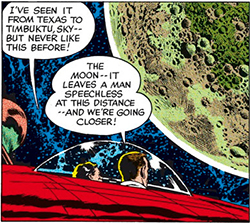 Jack Kirby, one of the greatest comic artists, was born 100 years this year and Geek Culture has reflected extensively on his comics career. A relentless entrepreneur with an indefatigable work ethic, Kirby was always trying new things. As you’d expect, he tried the newspaper comic route too.

Kirby’s Sky Masters was his foray into the world comic strips. It’s a gorgeous looking strip with a crazy backstory. And then add another legendary artist, Wallace Wood, to the tale. Amigo Comics is bringing it back to the world for us all to enjoy. I caught up with Ferran Delgado to learn more.

Ed Catto: Sky Masters is one of those legendary series that fans have read, and read about, from time to time. Can you remind us all of just what Sky Masters was?

Ferran Delgado: Sky Masters was a newspaper strip published from 1958 till 1961 by The George Matthew Adams Syndicate, with a run of 774 dailies and 54 Sunday strips. Theoretically, it was included in 300 newspapers around the country, but judging on how hard is to gather a complete set of Sundays strips, I doubt that it was widespread so much.

The Sundays were designed to adapt to three formats – tabloid, half page and third page, so they included the feature “Scrapbook” that was sacrificed in the third page format. When the half format had to be transformed in a tab page, they removed the last two panels of the Scrapbook so it fit in the last tier, and added a brand-new panel. 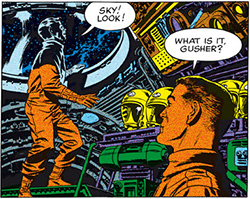 The strip was drawn and colored by Kirby, scripted by Dave & Dick Wood and embellished by Wally Wood and Dick Ayers. Kirby himself also inked a few strips with the help of his wife Roz. Kirby wrote many strips because the Wood brothers (Dick and Dave) often were difficult to reach.

EC: Now just to be clear, were writers Dick and Dave Wood related to artist Wallace Wood? What was their relationship?

FD: No relation at all. The strips were signed “Kirby & Wood” after the Wood bros (Dick & Dave) and Kirby, even when Kirby wrote the strips himself.

EC: What can you tell me about the collaboration of Jack Kirby and Wallace Wood on this strip? Of course, Wally Wood and Jack Kirby would later collaborate on DC’s Challengers of the Unknown. Can you draw a line from Sky Masters to Challengers?

FD: Wood admired Kirby, he felt that he was a genius, so he loved working with him. It’s difficult to set a timeline about which work Wood inked first, if Challengers or Sky Masters, but Wood was more than an inker for the strip, he even was invited to design the logo and he took part in the decision of the name.

In fact, before Wood was offered the Challengers he was working with Kirby on a pitch named Surf Hunter. I’m sure about this order because Kirby recycled a panel of a daily of Surf Hunter inked by Wood to do a sketch of a panel of Challs #4, the first issue inked by Wood.

So both pursued a newspaper strips for many reasons: economic, prestige, dissemination of their work to a wider public with a different range of age, etc. The art of Sky Masters reflects that. If you compare it to Challengers, the artwork is superior. Even the Surf Hunter pitch has better quality than Challengers, in spite that it was a great work, too. 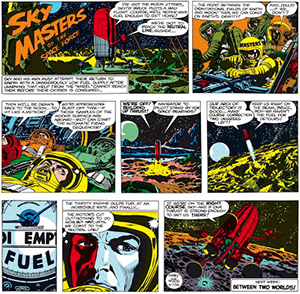 EC: When and why did Sky Masters end? Were there legal issues?

FD: The last daily was dated Feb 25th, 1961, a few months before the debut of Fantastic Four, but the Sundays ended a year before.

About the legal issues, the background of the strip is so fascinating like the strip itself, because the consequences of what happened around it blacklisted Kirby in National, and pushed him over to Marvel. This is probably the mother of all the What If, because if not for what happened with the strip, he would keep working for National and probably not for Marvel.

To summarize the background story, Kirby worked just for one editor at National, Jack Schiff. The General Manager of The George Matthew Adams Service syndicate visited Schiff because he wanted to produce a strip about the space race with a realistic approach, and wondered if Schiff might help him since they were publishing science fiction stories at National. Since Schiff was awfully busy, he contacted Dave Wood and Jack Kirby and offered them the gig.

Let’s say that negotiations were difficult, and a problem arose about the Schiff’s commission. Since he was not happy about it, and Kirby refused to give him more than agreed, Schiff sued Kirby. Kirby not only lost the trial, but the economic deal about the strip sucked. As expected, Schiff stopped giving work to Kirby so he got pushed to Atlas (soon to be renamed Marvel) to get as much work as possible in spite fees were much lower than National’s.

EC: Has Sky Masters has been reprinted before? And what makes this book different?

FD: In spite of the high quality of the strip, its reprinting was so troublesome like the background of it. In 1980 there was the first attempt. A magazine compiled a very limited run of dailies, but quality of reproduction was poor.

A more serious edition was the Pure imagination magazine that in 1991 compiled also a nice run of dailies and eight Sundays recolored. But the most complete edition got published also by Pure Imagination in 1999, because it included all the dailies and almost all the Sundays in tab format (strip #52 was missing). But just in black and white, and quality of reproduction sometimes was poor. 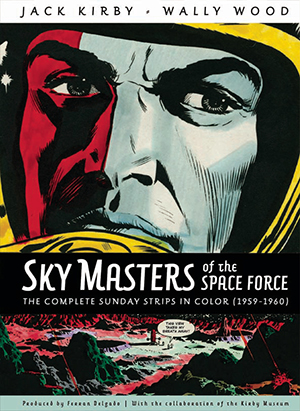 Many of the Sundays were published for first time in color in the covers and back covers of the Comics Revue, but reproduction was awful and mostly of them were incomplete.

I compiled all the dailies in a Spanish edition upgrading the quality of many of the strips of the Pure Imagination book with the help of the printer’s proofs stored at the Kirby Museum.

Very soon a bootleg edition will compile the dailies in a single book, but it’s shot from my Spanish books without my permission or the Kirby Museum’s, so quality of reproduction will be poor since they don’t use original files.

The main interest of my book is that, for first time ever, it will display all the Sundays with its original color by Kirby painstakingly remastered like if they were brand new. It took me many months working full time to do it! As any newspaper strip collector will confirm, it’s practically impossible to find a complete set of Sundays.

Since the tab format sacrificed the last two panels, I’ll publish about 90 panels never seen before, even in the Pure Imagination edition. Furthermore, I’ll include a large section with the original color guides painted by Kirby over stats, where you can enjoy the linework without any kind of distortion by printing.

In fact, many of the remastered Sunday strips have better linework than the Pure Imagination book since I could choose between a few samples of each strip. In fact, sometimes I used parts of different strips always seeking the best source.

EC: Were you able to track down any of the original art to Sky Masters?

FD: Sure. The Kirby Museum supplied some of them, and I got other scans from original art collectors like John Byrne, who owns one of the best samples and the iconic promotional image.

EC: There was a fascination with rocket ships and space travel in the late 50s and 60s. How much of that is part of Sky Masters’ DNA?

Almost everything in the strip is related to the space race that started with the Sputnik. In fact, the Sundays try to educate the reader with the glossary or objects used in space and make predictions about how will be the future, which is funny. Sometimes they guess it but others they couldn’t be more wrong.

EC: Do you feel this “Rocket Ship” theme is dated or timeless?

FD: I think that it’s timeless, specially in our times where we’re living a new exploration age although with a wider competition, this time with private companies. The work also captures a key age where that will bring fond memories to everybody who grew in that age.

EC: If Sky Masters had continued, what do you think it would have become?

I think that it ended too late. The last daily strips have low quality, and you could see that Kirby abandoned it in spirit long before. The strip had an awesome peak, but at certain point you could see how the trends of the moment influenced it, and what happened with Schiff and the trial also had an impact in the work. But the Sundays ended way before that point, so you’ll find the best of the strip, specially in the first half because they’re beautifully rendered by Wood. It takes your breath away.

EC: When is your book on sale? And how can fans pre-order through their local comic shops?

FD: It’s available right now through the Previews catalog, just search for the publisher Amigo and order it, or simply ask your local comic shop to order it for you. The book should be available in the finest stores in January.

EC: What’s makes Sky Masters special and why have fans always loved it?

FD: It was the best work that both Kirby and Wood could do at the age, they were at their peak, totally motivated to succeed in newspapers strips. They felt like it was a dream come true, and it was an opportunity that maybe would never show again, so they threw themselves on the project. Furthermore, the final art was more than the sum of the individuals, it’s something absolutely special and unrepeatable.

EC: Thanks so much, Ferran.